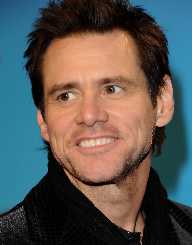 Jim Carrey is a Canadian comedian, and since 2004, he has been a U.S citizen. He is famously known for his body movements and facial expressions, which have helped him in his career as an actor and a producer. His stardom began in 1990 when he appeared in In Living Color, which was a sketch comedy after relocating to Los Angeles. Some of his famous roles were in the 1994 movies Ace Ventura: Pet Detective, Dumb & Dumber, and the Mask.

James Eugene Carrey was born on January 17, 1962, in Newmarket, Ontario, Canada. Carrey’s mother, Kathleen Oram was a homemaker married to his father Percy Carrey who was a Jazz musician and accountant. He was the youngest of his three siblings they are John, Patricia, and Rita. In his childhood, Carrey was an extrovert and he normally performed to anyone who had time to watch him. When still a child, Carrey had mailed his acting resume to The Carol Burnett Show in 1967. At the age of 15 years, Carrey had secured a spot at Toronto comedy club where he did stand-up comedy.

Before joining 'Agincourt Collegiate Institute' where he studied for a year, Jim Carrey had gone to study for a brief period to 'Blessed Trinity Catholic School', North York.  He then went to 'Northview Heights Secondary School' where he dropped out due to financial constraints. While in Burlington, Ontario, where he had lived for eight years, Carrey attended Aldershot High School. While in junior high , he was granted some time after school to do a stand-up comedy for his classmates.

While in Toronto, Jim Carrey started to perform in 'Yuk Yuk's', where he had little recognition but his father helped him secure a place. His ambition of big screen debut could not be achieved easily due to the financial problems, which his parents had. The family moved on and they started going to a more financial stable environment that Carrey started from open-mic nights to regular paid shows. The famous comedian Rodney Dangerfield later noticed him and signed him up to open his tour performances.

Dangerfield later brought Jim Carrey to Las Vegas, but afterwards, he moved to Hollywood where he performed at The Comedy Store. In the year 1982, Carrey appeared on An Evening at the Improv, which was a televised stand-up show. He had tried to audition for the NBC’s 1980–1981 season in Saturday Night Live to no avail. However, he was able to host the show in May 1996, January 2011, and October 2014.  Carrey appeared in The Duck Factory, which was a 1984 short-lived comedy. As from 1990 to 1994, Carrey was able to be cast at regular intervals in the In Living Color television series.

Jim Carrey's biggest act was in 'The Truman Show’ that took place in 1998 and had a combination of satire and drama.  The 1999 in 1999, Man on the Moon film, helped Carrey who had the lead role to gain more support. He gained more fan based with the cult like persona when he took the lead role in the 2003, Bruce Almighty. The 2004 Eternal Sunshine of the Spotless Mind film also made Carrey to be gain an overwhelmed acclamation

In 2007, Jim Carrey played in The Number 23, and in 2008 his voice was used in Dr. Seuss' Horton Hears a Who while he also featured in the live comedy, Yes Man. In 2009 he acted in  I Love You Phillip Morris, and in the same year, he got multi roles in the 3D Charles Dickens tale, A Christmas Carol. In the year 2011, Carrey got a lead role I Mr. Popper's Penguins, and in 2013, he co-starred in The Incredible Burt Wonderstone. He produced the documentary, Hoe Avenue peace meeting, in 2015.

In May 2014, Jim Carrey gave the commencement speech at the Maharishi University of Management in Fairfield, Iowa. His achievements philanthropically works, his writings, acting and comedy helped him to be awarded an honorary doctorate for his achievements. In 2014, he was also honored by Canada Post, which printed out a limited edition postage stamp with his portrait.

Jim Carrey has been experiencing depression, and he took Prozac. Eventually, he went off medication.