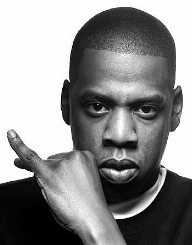 Shawn Corey Carter was born on 4th December 1969, to Adonis Reeves and Gloria Carter. He was born in New York City, New York, in the United States. Carter’s father abandoned the family, and the children were raised by their mother. Carter studied at Eli Whitney High School in Brooklyn, and when it was closed, he then transferred to George Westinghouse Career and Technical Education High School.

After his mother bought him a boom box, he developed an interest in music and began writing his music as well as freestyle. Carter was known as “Jazzy” at the time, so he used that to come up with his stage name of “Jay-Z”.

Being very entrepreneurial, Carter sold CDs from his car because he didn’t have a record contract with anyone. In 1995, he established an independent label, Roc-A-Fella Records, in conjunction with Damon Dash and Kareem Biggs.

In 1996, Carter signed a distribution deal with Priority. His debut album, Reasonable Doubt, went to number 23 on the Billboard 200 and reached platinum status.

In 1997 he did another distribution deal with Def Jam and released his second album, In My Lifetime, Vol. 1. It was produced by Sean “Puff Daddy” Combs. It did even better than his first album, and once again, reached platinum status.

His next two albums in 1999 and 2000 continued with the same success, selling millions of copies.

Corey Carter had some controversy in 2001, pleading guilty to stabbing Lance Rivera, a record producer, at the Kit Kat Klub in 1999. Carter received a three-year probationary sentence. Over the next few years, Carter continued to release albums, and he also collaborated with other artists to release music, including, Missy Elliott, Beyonce, and Linkin Park. He held a concert in November 2003 which was supposed to be a retirement concert. Jay-Z initially planned to retire in 2004.

Late in 2004, Carter stepped in as President of Def Jam Records.

A year later in October 2005, C arter had head billing for the Power 105.1 annual concert held each year in New York. The title of the concert was “I Declare War,” and people were curious to see what would take place, and who exactly Carter was going to declare war on. Carter Carter had many guest artists, including Kanye West, and at the end of the concert made a public reconciliation with another rapper who he had formerly been at odds with.

He went on that year to perform in several festivals, including, Britain’s Glastonbury Festival, Denmark’s Roskilde Festival, and the O2 Wireless Festival in London.

In May 2009, Corey Carter left Jam and signed a contract with Live Nation. He then started touring on the back of his new album, and in 2010 he did several concerts with Eminem, and later he toured as the support for U2 on the Australian and New Zealand leg of their world tour.

Carter continued to release music and tour over the next few years. Carter has released 13 studio albums, and five collaborative albums, including one with his wife, Beyonce.

As well as his extremely successful musical career, Carter has proved himself a successful entrepreneur as well. His businesses including clothing lines, real estate, sporting teams and record labels. The first of his businesses, Rocawear, carries clothing ranges for men, women, and children.

Carter sold the rights to Iconix Brand Group for $204 million, but he retains his holding in the company, and still manages the marketing, licensing, and product development.

Carter is a co-owner of 40/40 Club, which is a sports bar concept. They will be expanding from the U.S. into Singapore and Tokyo, and he is also working on an agreement to get the bars into around 20 airports.

Carter also bought a share in the Brooklyn Nets NBA team. He was actively involved with the club, but he gave up his share in the club during 2013. Another business venture is a real estate development called J Hotels. The consortium has recently purchased a parcel of land in Chelsea, New York, an nd they are currently deciding whether to build a high-end hotel or an art gallery. Carters other business interests include his own sports agency, Roc Nation Sports, and alcohol including Armand de Brignac champagne, and Budweiser beers.

He has also invested in a media technology company, an app for people to book trips on private jets, and skin care and beauty brands. Between 1998 and 2018, Corey Carter has also appeared in seven movies, and been the executive producer for another two.

Corey Carter has been nominated for a massive 213 awards and has won 100 of them, which is a tremendous feat. His wins include 21 Grammy Awards, eight MTV Music Awards, and three American Music Awards.

In 2008, Corey Carter married Beyonce, one of the most successful singers and performers in the U.S. They have three children together.

In 2003, Corey Carter established The Shawn Carter Foundation in conjunction with his mother. The Foundation helps students who are facing socio-economic hardships with their education through college.