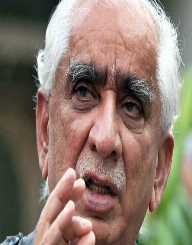 Jaswant Singh is a rigid politician from India known for his relentless political views.During the National Democratic Alliance (NDA) in India, he headed the ministry of finance [1996-2002]. Jaswant also led defence (2000-2001) and external affairs (1998-2002). He became deputy chairman of India’s planning commission for one year since 1998. He also acted leader of the opposition (2004 – 2009). He belonged to Bharatiya Janata Party (BJP) and the Rajya Sabha. Due to campaign controversies, he was dropped by the B.Janata party on 29th march of 2014.

On 3rd of January 1938, Jaswant Singh was born to a Rajput family. He was born to Thakur Sardar Singh (The father) and Kunwar Baisa (his mother). They lived in Jasol village, Barmer district, Rajasthan which was part of British India. He later became a confused teenager looking for his life's real mission. He decided to join the Indian army. At a tender age of 15, he became a cadet in the Joint Services Wing (1953). The JSW would train cadets.

As a cadet, he nurtured in himself discipline, self-control and time management skills. He also learned the value of good health from the intense physical activity. The military training proved to be indeed a stirring experience. He attributes his achievements to Mayo College and national defense academy, India.

Jaswant Singh decided to vie for the central Indian force and was selected as the second lieutenant in December 1957. He passed out among few others and served in the army for close to nine years. He was passionate about being a famous officer at age 19, but soon the interest in army life faded, and he resigned in 1966. Admittedly, he was particularly interested in politics and wanted to build himself a political career. He joined politics in the 60s, and his first few years in Indian politics, he lacked recognition in the field.

Bhairon Singh Shekhawat, known to be Jaswant’s mentor, took him under his wing in 1980. With time, he was elected to the Indian parliamentary upper house, the Rajya Sabha. Later, he was re-elected for a second term at the Rajya Sabha in 1986. For the next three years, he served as a member of public accounts committee, and the board of privileges. He was also on the review committee established by Punjab state legislature act, 1987.
He served finance minister of the Atal Bihari Vajpayee government which was transient. It lasted from 16th may 1996 up to 1st June 1996. Two years later, Vajpayee became prime minister again. This time, Jaswant Singh became the external affairs minister of India from 5th December 1998 up to 1st July of 2002. During this time, he dealt wisely with the delicate scandal which implicated India and Pakistan.

In July 2002, Jaswant Singh took his former role of finance minister replacing Yashwant Sinha. Diligently, he outlined and pushed through with market-friendly reforms. He was instrumental until May 2004 when the Vajpayee government was defeated. He was the minister of defense at the time. He was elected minister of defense when George Fernandez resigned after the Tehelka public exposure. He became a member of the joint parliamentary committee in 2004. This committee dealt with the installation of portraits of national leaders and members of parliament in the parliament house complex.

For two years (2004-2006), Jaswant Singh was a member of the committee that dealt with science, technology, environment, and forest. He was also a member of water resources committee before becoming an opposition leader in Rajya Sabha until 2009. In 2010 - 2014, Jaswant was elected to Darjeeling seat. Jaswant contributed so much to the welfare of hills and its people. His contribution is evident because he inspired many organizations.

Jaswant Singh insinuated in his book that a secret agent was hiding in the prime ministerial office during the term of P.V.Narasimha Rao. He stated that the mole had disclosed information to the United States sources. He was challenged by the Indian prime minister to expose the mole following which Singh wrote a letter to him. Manmohan Singh, the prime minister, later revealed that the message had no signature or name of the mole. Jaswant then backed off claiming his views were baseless.

It was then that Jaswant released his book called “Jinnah: India-partition-independence.” In his book, he supposedly commended Pakistan’s founder; Mohammad Ali Jinnah. He accused the centralized laws of Jawaharlal Nehru of the division. In interviews with the media, he quoted Bharatiya Janata Party to be narrow-minded and with limited thought. This outburst caused him to be ousted out of the primary membership of BJP. However, he was reinstated to BJP in 2010.

Jaswant Singh was denied Member of Parliament candidature for Barmer by the BJP for the general election in 2014. He was again disqualified from BJP for six years after contesting the Lok Sabha election because he had run independently and in opposition to his party candidate out of unhappiness. Unfortunately, he lost in the polls.
Party leaders have repeatedly criticised Jaswant for ushering terrorists to Kandahar, Afghanistan. The Indian government then released the terrorists as a ransom for hijacked Indian passengers in Airlines plane.

Jaswant Singh earned a reputation after handling the relations between the United States and India. The relationship between the two states had been strained after 1988 Indian controversial nuclear weapon tests. In 2000, He met the president of the US, Bill Clinton, in India and repaired the relationship. Since then he was acknowledged as a skilled negotiator. His diplomat skills were recognized by his US counterpart, Strobe Talbott. He received the outstanding parliamentary award for 2001.

Jaswant Singh met and married Sheetal Kanwar. They were blessed with two sons. Manvendra Singh was the first son and became a member of parliament for Barmer. Manvendra also has two children, Harshini Kanwar Rathore and Hamir Singh Rathore.

In 2014, Jaswant Singh had a significant fall at his residence and suffered severe head injuries. He was confined in a hospital, Amy’s Research and Referral, Delhi, India for four months. He has never recovered fully since. He got into a state of coma since the injury, and when this biography was written, he had not still recovered from the coma.