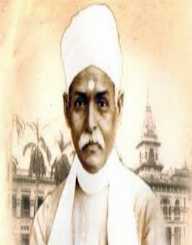 Indian politician and educationist Madan Mohan Malaviya, known as Mahamana, was born on the 25 December 1861 in Prayag. He was one of nine children. Both his grandfather, Pt Premdhar and his father, Pt Baijnath were Sanskrit scholars. His father was also a gifted Kathavachak, a narrator of the Bhagawat stories.

Madan Mohan Malaviya was trained in Sanskrit and then attended the Saraswati School where he studied English. In 1884 he was awarded a B.A. from Muir Central College.

Initially, Madan Mohan Malaviya was keen to train to be a Kathavachak like his father, but financial constraints meant that he had to find work. In 1884, after obtaining his degree, he joined the Government School as a teacher.

Madan Mohan Malaviya began legal studies in 1889 and 1891; he passed his law degree. His first position was in 1891 in the local District Court. He then moved to the High Court in 1893. He was a successful lawyer with a reputation as a brilliant civil lawyer. When he turned fifty, he retired, deciding to serve his country instead.

Writing under the pseudonym of Makrand, served as journalist, essayist, speechwriter, and poet. In the early 1880’s his poems were published in Harischandra Handrike magazine. The Hindi Pradeepa (Indian Union), the weekly publication used him as an editor in the mid-1880s. And at the 2nd Congress Session held in Kolkata in 1886, Raja Rampal Singh heard Mahamana give a speech and was impressed by the young man. Singh subsequently asked Mahamana to edit The Hindustan (1887-1889).

Madan Mohan Malaviya also wrote for the Indian Opinion (1889), an English daily newspaper and the Hindi weekly Abhyuday, which he edited between 1907 and 1909.

The English Government suppressive freedom of the press with the Press Act and Newspaper Act of 1908 was strongly opposed in India. Mahamana subsequently arranged a campaign against the act. Along with Motilal Nehru, he also organized The Leader, an English daily newspaper, which served as the voice of the campaign.

Madan Mohan Malaviya was voted President of the Indian National Congress in 1909 and was reelected in 1918 (He was elected in 1930 and 1932). It was around this time that Rabindranath Tagore bestowed the title Mahanama upon him. In 1911, Malaviya decided to stop practicing law and follow the tradition of Sannyasa for the rest of his life. He returned to the law briefly to defend 177 freedom fighters in the Chauri-chaura case, saving 156 of them from hanging.

Madan Mohan Malaviya was a central figure in the non-cooperation movement, opposed to appeasement. He also opposed the participation of Congress in Khilafat movement.

Along with Lala Lajpat Rai and Jawaharlal Nehru and other activists, he was involved in the protest against the Simon Commission in 1928. He was a delegate to the Second Round Table conference in 1931. And in 1932 he issued the Buy India manifesto of the movement in India.

Madan Mohan Malaviya was also heavily involved in education and was responsible for the establishment of the Banaras Hindu University. This university is today the largest residential university in Asia with a student intake of 12,000.

Madan Mohan Malaviya is remembered as a committed Hindu nationalist and as one of the original leaders of the right-wing Hindu Mahasabha party. His role in the Independence movement, the non-cooperation movement, his opposition to Congress’s participation in the Khilafat movement, the civil disobedience movement and the Buy India campaign are all part of his legacy. He was also the founder of the Congress-Nationalist Party which he started with Madhav Shrihari Aney. Socially he opposed the caste system. He was also a founder of scouting in India.