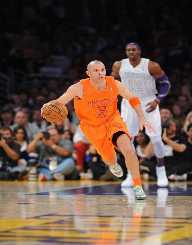 Jason Kidd, American basketball coach, and former player was born on March 23, 1973, in San Francisco. Kidd was raised in Oakland. Kidd was interested in basketball since early childhood. In school, he quickly developed an impressive set of skills. He was playing for youth teams and won several MVP awards. In Oakland, he often played against Gary Payton.

Jason studied at Joseph Notre Dame High School in Alameda. During his high school years, Kidd was highly successful. He won two consecutive California’s Player of The Year Awards. Kidd was offered many opportunities for universities but chose to attend the University of California. This was a significant shock for his fans and supporters since the University hadn’t won a conference title since 1960’s.

Jason Kidd's first year playing for the Golden Bears was successful and won him the Freshman of the Year honor. His average was 13 points, 4.9 rebounds, and 3.8 steals per game, a total of 110 steals in the season was a new record by a freshman. His 220 assists in the season was also a new school record.

As a sophomore, Kidd continued his streak of success. He was selected a First Team All-American, the first player from University of California since 1968. He was opted to enter the NBA draft in 1994.

Jason Kidd was selected to play for the Dallas Mavericks in 1994. In his first year, Kidd won a shared NBA Rookie of the Year award. After Kidd joined the Mavericks, the team's record rose from 13-69 to 36-46, which was the most significant improvement in the NBA. The following season he was selected to play in the 1996 All-Star game.

Kidd had various problems with the team’s coaches, and following the injury of Jamal Mashburn, the team’s success started to decrease. After only three seasons in the league, Kidd was traded to play in Phoenix Suns.

In the Suns, Kidd continued his success. In the 98-99 season, he acquired his career high points. He was the only player in NBA to be in the top 50 in 10 different statistical categories. Before the next season, Suns hired Penny Hardaway. Kidd and Hardaway in the starting lineup were named and the BlackCourt 2000.

Unfortunately, both of the Sun's stars were injured -  Jason Kidd broke his ankle and only returned during playoffs. During his time with the Suns, he made All-Star game in 3 seasons. He was voted the All-NBA First Team three years in a row. In 2001, Kidd was again traded and went to play for New Jersey Nets.

The Nets experienced a very positive transformation after acquiring Kidd. In the 01-02 season, Nets finished with a 52-30- a 26 game improvement. The team also had the first 50-win season in the history of the Nets. He was again voted All-NBA First Team that season. The Nets went to play in the NBA Finals for the first time in franchise’s history.

In the playoffs, Nets went to the finals but were defeated by Los Angeles Lakers, with their prominent players Shaquille O’Neal and Kobe Bryant. The following season, Nets also played in the finals but lost to San Antonio Spurs. =

In 2003, it was rumored that Jason Kidd would replace Tony Parker in the Spurs. But later that year, Kidd made a 6-year, $99 million deal with the Nets. His time with Nets was a great success, and in 2008, he was again traded for Dallas Mavericks.

The Mavericks were hoping that Kidd will lead them to their first ever NBA championship. Although the team did well, they were eliminated in the first round of playoffs. The next season Mavericks started with eight losses from fifteen games. The team recuperated and played in the finals, but lost in semifinals to Denver Nuggets.

In 2009, Jason Kidd verbally agreed to resign to the Mavericks, although he was being pursued by the New York Knicks. He signed a three-year deal for more than $25 million. The 2009-10 season was not so successful for the team, and it was rumored that just before the Playoffs, Kidd had the flu which influenced his performance. In 2011, Kidd won the NBA championship with the Mavericks.

In 2012, Kidd signed a 3-year deal with the Knicks. With the team, he played for average 33 minutes per game. His first season, the Knicks finished with a 54-game win. The team got to playoffs, but Kidd was held out during the last ten games. In 2013, after 19 seasons in the NBA, he retired.

After retiring from his playing career, in 2013 Jason Kidd joined Brooklyn Nets as a coach. The next season, he joined Milwaukee Bucks, where he is still the coach.

In 1997, Jason Kidd married his first wife, Joumana. The couple was reported to have some marriage issues. In 2001, he was arrested on charges of assaulting his wife. He pleaded guilty to the charges and was ordered to attend anger management classes. The couple stayed together and attended church very often.

In 2007, Kidd filed for divorce and claimed “extreme cruelty” as the reason for divorce. He claimed that his wife is intensely jealous, paranoid and has made false claims of domestic abuse to the police. She later filed a counterclaim, stating that Kidd is physically abusing her. The couple has three children.

After divorcing Joumana, Kidd got married again in 2011. His wife is former model Poschla Coleman, and they have two children.

In 2012, Jason Kidd was arrested for drunk-driving. His car struck a telephone pole just a few blocks from his home.