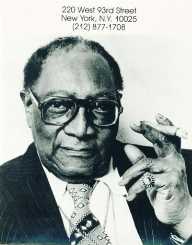 American artist James Van Der Zee was born in Lenox, Massachusetts on the 29 June 1886. His parents had been living in New York City but returned Lenox to work for President Ulysses S. Grant who had retired to Lenox. His father, John Van Der Zee, served as Grant’s butler and his mother, Elizabeth Van Der Zee, as a maid in the household.

Van Der Zee was one of six children and was raised in a large four-bedroom house built by his grandfather. Later on, his parents began producing baking products their boys would deliver them to customers for them. Van Der Zee showed should musical talent as a boy and was taught to play the violin as well as the piano.

James Van Der Zee entered a magazine promotion to win a camera, which he won. From the age of fourteen, he used the camera to photograph his family, friends, and locality. He was one of the first photographers to record life in a small New England town. In 1906, he relocated to New York City with his brother Walter. When he first arrived in the city, he worked as an elevator operator during the day or as a waiter by night to support himself.

He also played in bands and co-founded the Harlem Orchestra. He spent a year in Phoebus, Virginia but returned to New York City in 1908.  His interest in photography continued, and in 1915, he found a position as a darkroom assistant in a photographic studio in Newark, New Jersey. He also spent time gaining experience as a portrait photographer.

When James Van Der Zee returned to New York City, he settled in Harlem at the same time as various immigrants were moving into the city. He began working as a portrait photographer from his sister’s premises and eventually established the Guarantee Photo Studio in Harlem (1918). Soon, he started to make a name for himself, and the 1920s was a successful decade for him. The Great Depression of the 1930s  affected his business and to compensate; Van Der Zee added photo restoration and other photographic services to his business.

He photographed many famous people of his day including the actress Florence Mills, the dancer Bojangles Robinson, writer Countee Cullen, Joe Louis, Jack Johnson, and Marcus Garvey. He was the official photographer for Garvey’s Back to Africa movement. The arrival of the Brownie camera in the 1940s led to a further loss of business for Van Der Zee, and he made up for it doing calendar photography and mail order restoration, continuing photographing and documenting the people and environment around him as he recorded life in Harlem, shooting weddings, family events, street scenes, and sporting events.

Harlem on My Mind

During the late 1960s, when the American Black Consciousness Movement was happening, the Metropolitan Museum of Art, New York decided to hold an exhibition Harlem on My Mind. African-American photographer, Reginald McGhee, was researching the exhibition when he was introduced to Van Der Zee. He visited the photographer in his studio in Harlem and was amazed to a photographic collection spanning six decades of life in Harlem. James Van Der Zee's work provided 90 percent of the visual content for the exhibition. Around this time he was evicted from his home and moved to a hotel.

James Van Der Zee's second wife died in 1976, and for a period Van Der Zee was living a somewhat chaotic, financially strapped life. Eventually, after Donna Mussenden assisted him, he went on to have a further creative burst and began retaking photographs after almost a decade of neglecting his art.

Notable photographs from this period include one of Muhammad Ali. Van Der Zee published two books. He published The Harlem Book of the Dead (1978) as well as James  Van Der Zee The Picture Takin’ Man (1979). With the assistance of Mussenden, Van Der Zee travelled, lectured and held exhibitions during his final years.

James Van Der Zee's first wife was Kate Brown (m.1907-d.1915), and the couple relocated to Phoebus, Virginia in the early 1900s for 12 months before returning to New York. Their first child, Rachel was born in Virginia and died at age 16. The couple also had a son who died as an infant. His second wife was Gaynella Van Der Zee whom he married and opened his first studio within 1918. Gaynella died in 1976, and he later married Donna Mussenden.

Mussenden was a younger woman who had sought the photographer out to offer assistance when she heard that he was broke, living alone and depressed. She helped put his affairs in order, organised his life and eventually married him. They remained together until his death. James Van Der Zee died at the age of 96 on May 15, 1983.