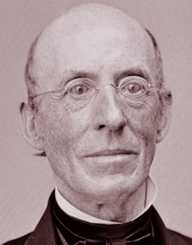 William Lloyd Garrison was born in 1805 in Newburyport, Massachusetts. His father as a merchant sailing master and after the Embargo Act was passed in 1807, the family experienced financial hardship. In 1808, his father deserted the family. As a young boy, William had to work, and some of the tasks he undertook were delivering homemade candy and wood.

After trying various apprenticeships, William Lloyd Garrison got a job working as a writer at the Newburyport Herald. In 1830, he joined the Abolition movement. He was also involved with the American Colonization Society. The society advocated that free blacks should be allowed to immigrate to Africa, particularly the west coast. William Lloyd Garrison perceived that the society was trying to keep the slavery status quo and in 1830 he had rejected their ideas. He joined the antislavery newspaper The Genius of Universal Emancipation as a co-editor, and by 1831 he was publishing his antislavery newspaper entitled The Liberator. He called for the immediate freeing of all slaves. His view was unpopular at the time, but he was adamant that blacks would be equal to whites in every way and this is what he advocated. He was seen a radical, but he was also an advocate of passive resistance and nonviolence.

William Lloyd Garrison was involved in helping establish the New England Anti-Slavery Society as well as the American Anti-Slavery Society, the first organizations to advocate immediate emancipation of all slaves. One of his key beliefs was that the anti-slavery movement should not be part of any political party. He also believed that women should participate in the society. One of his more controversial views was that he believed that the U.S. Constitution was pro-slavery. In 1840 these strong views caused problems within the society, and two organizations emerged: the Liberal Party and the American and Foreign Anti-Slavery Society. African-American activist and social reformer Frederick Douglass (1818-1895) and William Lloyd Garrison fell out over comments Douglass made indicating that he believed that the Constitution could be used against slavery. They later reconciled.

William Lloyd Garrison supported Lincoln’s Emancipation Proclamation, and after the Civil War ended in 1865, he shut down the Liberator newspaper.

William Lloyd Garrison married Helen Benzon in 1834, and the couple had seven children together. Helen died in 1876. After his wife’s death Garrison become involved with the Spiritualism movement which was gaining popularity in North America in the last quarter of the century.

William Lloyd Garrison lived with his daughter during his final years and died in 1879.