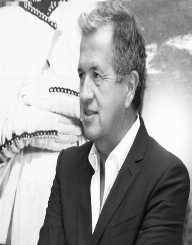 When one wants to know the world through the lens of a camera that is when the name Mario Testino comes in. Born from a humble beginning and defying all odds, Mario Testino has grown up to become one of the famous photographers in the world. Mario Testino is a Peruvian photographer born on October 30, 1954. He is also a creative director, guest editor, museum founder and also an art collector. Mario Testino has worked with international magazines like Vogue, V Magazine, Vanity Fair and GQ. His hard-earned reputation as an astute photographer with a touch of class gained him the opportunity to work with big brands like Gucci, Burberry, Versace, Estee Lauder, Michael Kors and Lancome. Being entrepreneurial driven, Mario Testino formed MARIOTESTINO+to deliver services like brand strategy, product development, film and still production, creative directions and art direction.

Mario Testino had built an uncompromised image which his flawless work delivers which had made him the number one choice out there. He has captured celebrities like Madonna, Britney Spears, Julia Roberts, Lady Gaga, Janet Jackson and other supermodels. His trademark, which is perfection, has gained him the accolade as the world’s most prolific magazine and fashion trade photographer according to the words of Aaron Hicklin of The Observer.

Mario Testino was born on October 30, 1954, as the eldest child of six. His family was an upper class Catholic with Irish, Spanish and Italian descent. Mario Testino grew up in Lima and attended Santa Maria Marianistas, a Catholic school. Growing up, his dream was to become a priest, but the dream changed as he pursued education. Mario Testino had his tertiary education at the Universidad del Pacifico where he studied economics. He continued to Pontificia Universidad Catolica del Peru and then to the University of San Diego, where he studied Law and International Affairs

Mario Testino’s popularity was not built in a day, neither was it by chance, but by his passion, hard work, and love for the photography profession. It all started from a humble beginning when Mario Testino abandoned his previous studies as he traveled to London to study photography in `1976. After his photography lessons, he understudied John and Paul Nugent at their studio. It was this time that he made an attempt to take a photograph. His days in London were that of hardship which forced him to live in an abandoned hospital floor.

Mario Testino later found work as a waiter to earn income for his upkeep. Doing this, he dyed his hair pink draw people’s attention to him being a photographer. This got him some attention, and as secular, as London was, he was able to express himself freely which was opposite to his years in Peru. Nonetheless, he never forgot his roots and inspirations of those days were incorporated into his photographic works. Working as a waiter, he got into contact with some workers of Vogue who identified him as a photographer and asked for some sample. This was the beginning of a great future Mario Testino may have not even thought of. In 1983, his first work appeared in vogue. He also worked with Vanity Fair, with which he later commissioned the iconic photograph of Princess Diana in 1997. He also worked with the American edition of Vogue as well as other popular brands.

In 2010, during the engagement of the Duke and Duchess of Cambridge, he was chosen as the official photographer for portraits. Mario Testino has since then worked for the British Royal Family with the most recent one being at the naming of Her Royal Highness Charlotte of Cambridge at Sandringham Estate. In 1998 he came out with the publication, Any Objection? and followed it with Front Row Back Row. His other publications include Alive in 2001 and Portraits, 2002.

Aside from his photography work, Testino has been involved in numerous charity works and has been honored accordingly. Mario Testino has worked with organizations like Save the Children as an ambassador to raise fund for the building of El Salvador Clinic in Chincha District to treat children with tuberculosis. The fund was derived from the sale of his portrait of Princess Diana auctioned at £100,000 Mario Testino also helped to raise funds to build a playground for Natalia Vodiano’s Naked Heart Foundation in Moscow specialized in cancer. He has also raised funds for amfAR, Elton John AIDS Foundation and the CLIC Sargent for children with cancer and several other philanthropic works.

Mario Testino has gained recognition and honors like Clio Fashion & Beauty Lifetime Achievement Award in 2016, International Center of Photography Infinity Award2015, Honorary Officer of the Order of the British Empire in recognition of services to photography and charity, 2014, and Best Photographer in the World Award.