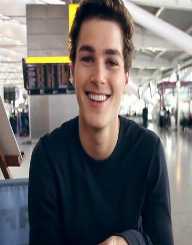 Jackson Harries is a famous American vlogger, actor, and comedian. Harries started his acting career when he was 13. He became widely known for his role in School of Comedy and his YouTube channel, Jacks Gap. This channel has attracted over 4 million subscribers. It educates the youth about the various climatic conditions and the lives of the unprivileged in different parts of the world.

Jackson Harries was born in London, England on May 13, 1993, to Andy Harries and Rebecca Frayn. His father is a film and television producer while his mother is a director and an actress. Harries has two siblings, a twin brother, Finnegan Harries Frayn and a sister, Emmy Lou. Jack grew up in Chiswick, London.

When he was 8, he was admitted to The Harrodian School where besides his usual subjects, he learned photography, media, and art history. At 13, he acted in Perfect Parents, a television drama movie as the son of Brendan Coyle. The next year he appeared on Shuffle, a BBC comedy as 'Barry'.
When he was 18, he joined The University of Bristol where he studied drama. He, however, quit because he wanted to focus on his YouTube channel entirely.

Jackson Harries joined the cast of School of Comedy, a teen sketch comedy. The program was first aired on an episode of Comedy Lab before it was adapted as an independent program. In the program, Harries portrayed different characteristics in many comedy sketches. His twin, Finn appeared twice as Harries' clone. Harries also appeared in a KFC advertisement in 2011.

Later in 2011, Harries launched his YouTube channel, JacksGap. After some time, his twin brother started to be part of the YouTube videos. In April 2012, the channel reached 10,000 subscribers. He then invited his brother Finn to be a co-partner. The videos he ranges from comedy sketches to unicycling, bungee jumping and making balloon animals as well as documentaries of their trips to Ibiza, Rome and Thailand.

Jack Harries is a humanitarian and spreads awareness on animal rescue. He loves to travel as seen on his channel; he goes to various parts of the world including; Tokyo, Istanbul, India, Ibiza among other places with his brother Finn. He at one time dated Ella Grace Denton, a social media star.

Jackson Harries went to the famous University of Leeds to study Graphic Design, and he is currently his filmmaker for his channel and travel blogs.