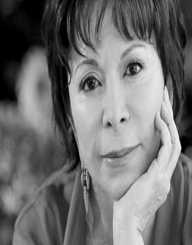 Isabel Allende had connections to the Chilean political leadership through the country’s First president with socialist credentials. Her father was the cousin of the Chilean president of that era. She was born in the city of Lima in Peru in the year 1942 and precisely on August 2nd.

Her father was a top diplomat for Chile, and he left the family in the lurch when she was two years old. She had a rebellious slant that became evident as she grew up with her grandfather. Her family had to live with the patriarch in those early years. She had a deprived upbringing although her family had access to the basics of life.

Her mother got married to another diplomat named Ramón Huidobro later on and had to travel often with every new posting he got.

Isabel Allende's determination to live like her grandfather with the privileges of life made her pursue excellence. She eventually became a journalist and a prominent one at that between the decade of 1960 to 1970.

During the military coup of General Augusto Pinochet in 1973, Salvador Allende was killed, and this changed the life of Isabel Allende. She became a voice for the oppressed but with the onslaught of Pinochet’s goons not relenting; she fled abroad. She turned to Venezuela and lived there for the next 13 years. She and her husband with two children made their home overseas.

By 1981, Isabel penned a couple of letters to her grandfather as he lay dying in their homeland of Chile. These letters became the anchor of the novel first published in her name “The House of the Spirits” in 1985. This eventually ended up as bestseller worldwide and marked the launch of her literary prominence.

The meat of the story was the two families who got woven together during the 50 years to the military coup in 1973. The themes she explored included political testimonies and magical realism. Her other works included “Eva Luna” as well as “Of Love and Shadows,” which were published in 1987.

As her family expanded, her grandchildren nudged her to write for young adults, and she concurred in 2002. The effort was titled “City of the Beasts” and got rave reviews. This work was, however, a trilogy starter with the other parts titled “Kingdom of the Golden Dragon” and “Forest of the Pygmies,” published in 2003 and 2005 respectively.

Isabel Allende is noted to explore realism, mysticism, social justice and political slant along with sparks of her childhood in depicting her worldview. All these run through her works.

This noted writer authored twenty-one books and had got translations in several languages across the globe. Isabel Allende has sold more than 65 million copies over a period of 30 years.

Her works included plays for kids, short fiction and stories that appeal to a wide variety of people across many countries. She has the credit for two films after her books were adapted for screenplays. More motion picture adaptation of her works are said to be under consideration by movie writers and producers.

Isabel Allende’s influence on literature around Latin American literature is distinctive with a feminine perspective. There is no loss in the literary world about her fantasy and magical themes. She finds a comparison with the Colombian magical realist author, Gabriel Garcia Marquez. This is from citations made by critics and admirers of her literary expressions.

Her blend of personal experiences in the characters she chooses for her books and political context gives her a distinct flavor. Her years spent in exile also show up in the language and hue of her later works.

Isabel Allende’s memoir “Paula,” which documented the life and times of her daughter, is unforgettable. In addition to “The House of Spirits,” “Inés of My Soul” and “City of the Beasts” all attained acclaim as international bestsellers.

Isabel Allende is a recipient of the 2010 Chilean National Prize for Literature and the Library of Congress Creative Achievement Award for Fiction. President Obama presented the Presidential Medal of Freedom to Isabel Allende in the year 2014. She is credited in the White House website with translations of her book in varied 35 languages across the globe. She was also admitted as a member of the American Academy of Arts and letters.

Isabel Allende was first married in 1962 to Miguel Friars and had Paula in the year 1963 and Nicolas in 1966. She divorced from Frias in the year 1987 and married Willie Gordon in 1988. Willie was also a writer with a law background. They eventually separated in 2015 after a shared history of 27 years of marriage.

In 1987, she moved to the U.S and settled in the San Francisco Bay Area. In the year 1993, she became an American citizen. Isabel Allende shares her time between the U.S and her Chilean homeland.