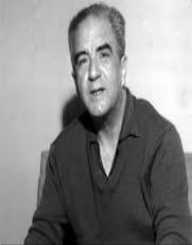 Ciro Alegria was a Peruvian author, journalist, and political activist.

Ciro Alegria was born in Sartimbamba, Peru, on November 4, 1909. His parents’ names were Jose and Maria. He had four younger siblings. He finished primary school in the town of Cajabamba and high school in the city of Trujillo. He took classes from the National College of San Juan and the University of Trujillo.

Ciro Alegria was surrounded by Indians from a young age. He saw their struggle, and he felt the need to help them.

Ciro Alegria spent a while working as a journalist for a newspaper called El Norte. In 1930, he became involved with the Aprista movement. The goal of the campaign was widespread social reform, as well as a better life for Indians. He was sent to prison in 1931 and 1933. In 1934, he was exiled to Chile.

Alegria wrote short stories for newspapers. He expanded one of them into a novel which was published in 1935. It was called The Golden Serpent. It talked about a group of villagers who lived around a river. In 1938, he released his second novel, Starving Dogs. It spoke about Natives who were shepherds. In 1941, he published Broad and Alien Is the World.

Ciro Alegria depicted the lives of Indians who lived in the mountains and their struggles when white people tried to take their land. This novel became the most significant success of his career. It became known internationally, and it was translated into different languages. He even won the Latin American Nobel Prize.

Ciro Alegria lived in the United States from 1941 to 1948. He translated screenplays for MGM. He also wrote articles and short stories for various magazines. After that, he started teaching classes at the University of Puerto Rico. In 1953, he moved to Cuba. He wrote about the Cuban revolution.

He returned to Peru in 1957. He joined the political party Popular Action. In 1963, he became a member of the Chamber of Deputies. That same year, he released a collection of short stories called Duel of Gentlemen. Three years later, he became the president of the National Association of Writers and Artists.

In 1935, Ciro Alegria married his first wife, Rosalia Amezquita. They had two sons, Ciro and Alonso. They got a divorce ten years later. In 1948, he married Ligia Marchand. That marriage also ended. In 1957, he married the Cuban poet Dora Varona. They had a daughter named Cecilia, and sons Ciro, Gonzalo, and Diego. His last son was born after his death.

Ciro Alegria died of a brain bleed on February 17, 1967, in Lima, Peru. After his death, his wife published some of his work. It included two unfinished novels – Lazarus and The Dilemma of Krause. It also included many collections of short stories and articles. Some of them were Panki and the Warrior, Andean Stories, Sun of the Jaguars, and others.