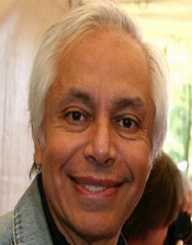 Boris Vallejo is a Peruvian artist who is best known for his fantasy images and his film artwork.

Boris Vallejo was born on 8 January 1941 in the capital city of Peru, Lima. He was born into a well-off middle-class family. His father worked as a lawyer. Vallejo’s early interests as a child were in music. He played the violin for seven years and received training in playing the instrument. However, he would quit pursuing medical studies. Vallejo spent two years studying medicine but dropped out to attend the Escuela Nacional de Bellas Artes. He studied art under a scholarship and spent five years studying. He turned down a chance to move to Florence to study and instead worked to develop a portfolio and immigrate to the United States of America.

In 1964 Vallejo moved to America despite having no money or English. He gained work illustrating advertisements for a chain store and was quickly hired to the company’s main office. Vallejo spent eight years at this position before leaving to become a freelance artist. He had developed a keen interest in fantasy style art at this time. He was inspired by comic book illustrations and switched to the fantasy genre as it allowed him to illustrate the human body, a growing interest of his. His early images of Tarzan and Conan the Barbarian helped him develop a reputation within the industry.

Vallejo also created some illustrations of 1930s comic book hero Doc Savage, a physician adventurer. This led to Vallejo receiving commissions for movie posters and advertisement illustrations. He also was hired by the Franklin Mint to create memorabilia and limited edition coins. Vallejo commonly used watered down acrylic boards as the medium for his work. Some of Vallejo’s best known and most recognizable work has been for movie posters.

In 198, Boris Vallejo illustrated the poster for the George A Romero film, Knightriders. The film, starring Ed Harris, is based on a troupe of jousters who use motorcycles instead of horses. In 1983, he illustrated the poster for National Lampoon’s Vacation, and he followed that up in 1985 with the illustration for National Lampoon’s European Vacation. The same year he completed what is possibly his most iconic illustration for the film Barbarian Queen. The film would later serve as inspiration for the TV show, Xena Warrior Princess. In 2007, Vallejo created the movie poster for the Adult Swim shows Aqua Teen Hunger Force’s film, Aqua Teen Hunger Force Colon Movie Film for Theaters.

Boris Vallejo met his first wife, Doris Vallejo when he first moved to America and began working in advertising for a chain of stores. Together they had two children, Dorian and Maya. Vallejo married his second wife, Julie Bell, in 1994. Vallejo and Bell had worked together for years on illustrations and books and continue to do so.

Boris Vallejo won the British Fantasy Award for Best Artist in 1979 for the painting, The Amazon Princess, and her Pet.