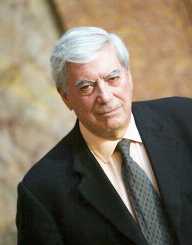 Jorge Mario Pedro Vargas Llosa best known as Mario Verga Llosa is an award-winning Peruvian writer and politician. He is also an essayist, journalist, and politician. He is one of the most popular writers in Latin America. Vargas Llosa has several novels like The Time of the Hero, The Green House, and Conversation in the Cathedral to his credit. His writings are mostly based on his convictions and experiences of the Peruvian Society and other parts of the world. He was given a Nobel Prize in Literature in 2010.

Vargas Llosa rose to fame and acclaimed worldwide for his prolific and artistic writing skills. Most of his novels are based on murder mysteries, historical books, politics, and comedies. Vargas Llosa has also been involved in politics. His political life and activism have gradually shifted from the political left to liberalism. Vargas Llosa, who once supported the regime of Fidel Castro later became his critic on policies. He once contested for the Peruvian presidency but lost.

Mario Vargas Llosa was born on March 28, 1936, in Arequipa, Peru. He was born to Ernesto Vargas Maldonado and Dora Llosa Ureta and is the only child of his parents. His childhood upbringing was in Arequipa until he and his mother alongside other family members moved to Cochabamba, Bolivia after his parents’ divorce.

So, much of his childhood life was spent in that town. All this while Vegas Llosa was made to believe his dad was deceased. The family returned to Peru after his maternal grandfather obtained a diplomatic post in Peru from José Bustamante y Rivero government. They lived in Piura after they returned and Vegas Llosa had his elementary education at the Colegio Salesiano academy.

At age ten, his mother reconciled with his dad, so they moved to Lima in 1946. There he schooled at the Colegio La Salle middle school from 1947 to 1949. He then moved to the Leoncio Prado Military Academy, Lima, but he left, later on, to complete his studies in Piura. While at the Military Academy, he was working as an amateur journalist for a local newspaper and did same when he moved to Piura. In 1953, he enrolled at the Lima National University of San Marcos to study Law and Literature. He graduated from the University in 1958 and gained a scholarship to pursue further studies at the Complutense University of Madrid, Spain.

Mario Vargas Llosa started a career in literature in 1957 with a debut publication The Leaders and The Grandfather. In 1960, he proceeded to Spain for his scholarship and moved to Paris after it had exhausted. All this while, he was with his wife, Julie. In Paris his aim to get an award failed, but decided to remain there and start his writing work.

In 1963, Llosa published his first novel, The Time of the Hero based on his experience at the Leoncio Prada Military Academy. The book generated displeasure among some Peruvian general for its denigrating the military establishment in that country. However, the book won the Premio de la Critica Espanola award for its in-depth literary techniques. He followed it with the novel The Green House in 1965 which also won several awards and propelled Vargas Llosa into the Latin American Boom. It is even considered one of the most beautiful books from Latin America.

In 1969 he came out with his third novel Conversation in the Cathedral centered on an ambitious son of a government minister and his chauffeur. Mario Vargas Llosa in 1969-1970 lectured at Kings College, London. Vargas Llosa continued with his impeccable writing skills and in 1971 published the book García Márquez: Story of a Deicide, a book he wrote about his friend Gabriel Garcia Marquez.

Mario then ventured into humor and satirical writings and a shift from the previous severe political and social essays. His first publication in this area was Captain Pantoja and the Special Service, 1973. The PEN International elected Mario Vargas Llosa as its president in 1976 to 1979 and as a member of Peruvian Academy of Languages in 1977. He has since been a member of the association till date. He also wrote several other novels like The War of the End of the World, The Real life of Alejandro Mayta, The Feast of the Goat and The Way to Paradise.

Mario Vargas Llosa was a strong supporter of the Federal Castro’s regime but later fell out saying the regime's way of socialism was not in consonance with general liberties and freedom. He then identified himself with liberalism ideology. In 1983, he was involved in the team Investigatory Commission on the Uchuraccay massacre which was to investigate a mass killing incidence which happened in Uchuraccay.

Llosa received several accusations from critics who stated that he connived with the government to hide the truth. He was a co-founder of the Movimiento Libertad in 1987 which later allied with other parties to develop Frente Democratic (FREDEMO). In 1990 he contested for the presidency on behalf of FREEDOM but lost during a runoff.

Mario Vargas Llosa has won several awards and honor including the Nobel Prize for Literature in 2010. Other awards are Rómulo Gallegos Prize and Grinzane, 1967, Cavour Prize for Fiction foreign, 1986, Maria Moors Cabot prize, 2006 and Pedro HenríquezUreña International Prize, 2016. Honors include Grand Cross with Diamonds of the Order of the Sun (Peru), Austrian Cross of Honour for Science and Art, 1st class, Chevalier of the Legion of Honour (France), Commander of the Order of the Aztec Eagle (Mexico)and several other honors and awards.

Mario Vargas Llosa married at age 19 to Julia Urquidi in 1955. His wife was ten years older than him. The couple divorced in 1964. After a year, he married Patricia Llosa his first cousin. The two had three children. He is currently in a relationship with Isabel Preysler, a Filipina-Spanish Socialist, and TV personality and seeking a divorce from his wife. He is an atheist.