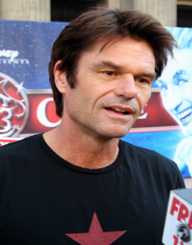 Harry Hamlin is an American actor. He is best known as Perseus from Clash of the Titans.

Harry Robinson Hamlin was born on October 30, 1951, in Pasadena, California. His father Chauncey was a rocket scientist and his mother Bernice was a housewife. He was inspired to be an actor and have the actor's lifestyle after seeing Richard Burton perform Hamlet in New York when he was 13.

Harry Hamlin attended Flintridge Preparatory School in California and The Hill School in Pennsylvania. Hamlin started his studies in at University of California – Berkeley.

He originally wanted to study architecture but was only able to sign up for drama courses. He transferred to Yale. Hamlin graduated with a dual bachelor's degree in psychology and drama in 1974. He then studied at the American Conservatory Theatre and graduated in 1976 with a Master of Fine Arts degree in acting.

Harry Hamlin had acting roles in the theatre during his time after The American Conservatory Theatre including the lead in “Equus.” His first film was in 1978 called Movie, Movie in the segment “Dynamite Hands.”  Hamlin was nominated for Best Motion Picture Acting Debut.

Hamlin found work in film, but also television. After mini-series and TV movies, he found success as attorney Michael Kuzak in L.A. Law from 1986 to 1991. He earned three Golden Globe nominations and was voted People Magazine's “Sexiest Man Alive” in 1987. After the L.A. Law series ended, he continued with television movies.

Harry Hamlin is also recognized for his appearances on reality television. He competed in Dancing with the Stars in 2006 and shared what life was like in his house with wife Lisa Rinna in Harry Loves Lisa in 2010. Rinna is one of the stars in The Real Housewives of Beverly Hills. In 2010, Hamlin also published his autobiography titled Full Frontal Nudity: The Making of an Accidental Actor.

Harry Hamlin is one of the celebrity supporters for the Barbara Davis Center for Childhood Diabetes and Elizabeth Glaser Pediatric AIDS Foundation. He is also on the Board of Governors of the National Space Society.

Harry Hamlin has given talks on fusion power and the development of a non-radioactive fusion power generator.

Harry Hamlin has been nominated for four Golden Globe awards including three back-to-back nominations for Best Performance by an Actor for L.A. Law. He was also nominated for the 2013 Primetime Emmy Award for his guest appearance in Mad Men.