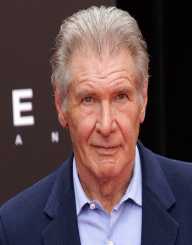 American actor Harrison Ford was born on the 13 July 1942 in Chicago, Illinois to Dorothy Nidelman and Christopher Ford. Both of his parents had been involved in some form of acting. Ford comes from a mixed Irish Catholic, German, Jewish and Russian ancestry. He has one sibling, a younger brother Terence (b.1945). Ford was a keen scout as a boy.

Harrison Ford attended Maine Township High School, Illinois graduating in 1960. He did his tertiary education at Ripon College, Wisconsin where his majors were English and Philosophy. Ford left college with obtaining a degree. Instead, he went to Hollywood.

Arriving in Hollywood in the mid-1960s, Harrison Ford found work with Columbia Pictures as a contract player. He then moved to Universal. His first film role was a small part of Dead Heat on a Merry-Go-Round. Ford found it challenging to get right parts, and at one stage he took up carpentry. His first break came when George Lucas cast him in American Graffiti in 1973.

Ford then had minor roles in Conversation (1974), and Apocalypse Now (1979) before George Lucas cast him as Han Solo in the hugely successful Star Wars. Star Wars was followed up with The Empire Strikes Back (1980) and Return of the Jedi (1983).

Films that followed included Witness (1985), The Mosquito Coast, Working Girl, Patriot Games (1992) and Clear and Present Danger (1994) based on author Tom Clancy’s character Jack Ryan. Air Force One in 1997 was another success. Ford’s output slowed in the early 2000s when he had the hugely successful Indiana Jones and the Kingdom of Crystal Skull in 2008. He appeared in Cowboys & Aliens (2010) with Daniel Craig. Morning Glory (2014) with Diane Keaton. In 2013 Ford was in 42, about the life of Jackie Robinson, a baseball hero. The same year he was in Ender’s Game and Paranoia.

Raiders Of The Lost Ark

Harrison Ford has been married three times. His first wife was Mary Marquardt (1964-1979). They had two children together. Son Ben is a restaurateur, chef and cookbook author and William is in the clothing business. Carrie Fischer said in her memoir The Princess Diaries that she had had a three-month affair, Ford, when he was married to Marquardt.

His second marriage was to screenwriter Melissa Mathison (1983-2004). They had two children: Malcolm Ford (b.1987) and Georgia (b.1990). Mattison was known for being the writer E.T. The Extra-Terrestrial (1982). Forbes Magazine reported that when the couple divorced in 2004, Mathison received roughly $85 million plus a percent of Ford’s future earnings from the films he made while they were married. Mathison died of neuroendocrine cancer in November 2015.

Ford’s third wife is actress Calista Flockhart. The couple has been together since 2002 and married in 2010.

Harrison Ford has had a long, successful career in Hollywood and has received many nominations. His first Academy Award nomination was for best actor for Witness (1985). He also received a Golden Globe nomination and a BAFTA best actor nomination for the role. In 2000 the received the American Film Institute Life Achievement Award. In 2008 Ford won the Publicists Guild of America’s Lifetime Achievement Award. Other wins include the 2002 Cecil B DeMille Award at the Golden Globes, the 2006 Jules Verne Award: Achievement and the 2016 Saturn Award: Best Actor for Star Wars: The Force Awakens.

Flying is Ford’s passion, and he has received many awards including the Living Legend of Aviation Award, the Wright Brothers Memorial Trophy (2010) and the Al E=Ueltschi Humanitarian Award (2013).