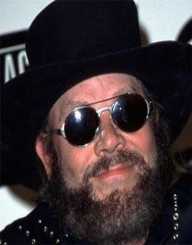 Randall Hank Williams famously know as Hank William Jr. is a brilliant country musician. He was born on the 26th of May 1949 in Shreveport Louisiana. Hank is the son of the late country music legend Hank William Sr. Hank quickly learned the trade and followed in his father’s footsteps.

By 8, he was singing and performing most of his father’s songs on stage. He had the chance to make his first television appearance in 1964 in an episode of the ABC’s, The Jimmy Dean Show. Hank is one of the greatest musicians because he created his own musical identity in his early 20’s. He managed to achieve this by combing and bridging between Southern Rock and Blues.

In 1975 while mountain climbing the Ajax Peek in Montana, Hank William Jr. had an accident and spent the better part of the following two years in recovery. He took the country music industry by a storm in the 80’s and became one of the top performers. By the end of his career, he managed to clinch several multiplatinum records.

Hank William Jr. was born on 26th May 1949 to Hank William Sr. and his wife, Audrey Williams. He went through a tough time due to the passing of his father in 1953. Hank was only three at the time. Hank Jr’s mother did not let the passing of her husband take a toll on her son. She molded him in the image of his father with the help of a lot of contemporary musicians who visited them at the time.

From a tender age already, Hank knew that he wanted to be a singer like his father. This is even though most children his age dreamt about being cowboys. Through rigorous training, Hank William Jr. made his first debut at the age of 8. This was later followed by his appearance at Nashville famed Grand Ole Opry at the age of 11. By the time he was 15 year of age, Hank Williams Jr. had made it to the top 5 hit on the country music charts.

Hank William Jr. made the charts with one of his fathers’ song, “Long Gone Lonesome Blues.” He is a former student of the Nashville High School where he sharpened his guitar playing in the music classes and the roadside rallies. The fame got to him in his teens, and he turned to drugs to cope.

Having been born to a musical dynasty, Randall Hank Williams did not have much trouble following in his old man’s footsteps. Through the guidance of his mother, Audrey Williams, and influence of countless contemporary musicians like Johnny Cash and Jerry Lee Lewis among others he found his voice in the country music industry. This resulted in Hank Williams Jr. discovering his own identity in the music world with a crossbreed between two genres of music, Southern rock, and blues.

His efforts led to the reward of a debut album in 1975, Hank Williams Jr. and Friends. His young career took a hit on 8th August 1975, while he was mountain-climbing the Ajax Peek in Montana. He fell suffering multiple fractures. He was out of the music industry for almost two years while undergoing recovery.

Hank William Jr. emerged from this like a phoenix with his signature look of a full beard, cowboy hat, and dark glasses. In the 80’s he rose to stardom attaining many multiplatinum albums and achieving several top charts singles,” Family Tradition, Texas Women and Born to Boogie.”

By the 1980’s, he was so prolific that he managed to record up to two hit albums in a year. In 1987 and ’88 he won the Country Music Association’s Award. The following year, 1989 saw him winning a Grammy Award for a duet with his recorded vocals named There’s a Tear in My Beer.

In the same year, Hank William Jr. began his long relationship with ABC’S Monday Night Football where he restructured his famous song,” All My Rowdy Friends are Coming Over Tonight” to be used by the program. His comparison of former President Barack Obama to Adolf Hitler was the main reason for the termination of his longstanding association with the ABC’s Night Football to an end.

Hank William Jr. married his first wife Gwen Yeargain till the year 1977. Shelton Hank Williams famously know as Hank III became their only child. After some time, Hank Jr. married his second wife and had two daughters namely Hilary and Holy. The music industry is a welcoming company for the family and has welcomed his two daughters. The two are also active in the music industry following closely in the footsteps of their father and elder step brother.
Hank Jr. later divorced his second wife but did not stay unmarried for long. The year 1990 saw to the union of Hank Williams Jr. and his third wife, Mary Jane. They were consequently blessed with two children namely Katherine and Samuel. Hank Jr. and Mary’s union suffered some set back that saw them separate in 2007 but later getting back together.