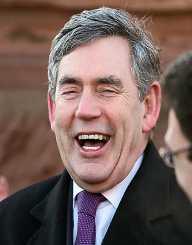 Beyond the Crash: Gordon Brown

James Gordon Brown, a former British politician representing the Labour Party of the United Kingdom and a former British Prime Minister, was born on February 20, 1951, at the Orchard Maternity Nursing Home in Giffnock, Renfrewshire, Glasgow, Scotland to mother Elizabeth Brown and father, John Brown. He was one among the three sons of Reverend Dr. John Brown, who was a minister in the Church of Scotland. He received his primary education from the Kirkcaldy West Primary School and after that completed his high school graduation from the Kirkcaldy High School.

James Gordon Brown was elected Rector of the University of Edinburgh, the convener of the University Court in 1972, while still studying at the University. He held the post of Rector till 1975. During his study at the Kirkcaldy High School, he met with an accident while playing an end of the term Rugby union match. The retinal detachment suffered by him due to a kick he received in his head, left him blind in his left eye. He tried his best to treat the eye with several operations and weeks spent in a darkened room without any success. In a similar incident, he observed the same symptoms in his right eye while playing tennis at the University of Edinburgh. However, this time his right eye was saved due to a timely surgery at the Edinburgh Royal Infirmary.

Gordon Brown joined Glasgow College of Technology as a lecturer in 1976 and served the post until 1980. He also taught at the Open University afterwards. He actively associated himself with the Scottish Labour Party, a part of the larger Labour Party of Britain and contested the general election held in May 1979 as a candidate for the House of Commons from the Edinburgh South Constituency. He lost to the conservative (Tory) party candidate Michael Ancram. Incidentally, Conservatives registered an important victory in this election, wherein the first woman Prime Minister of the United Kingdom, Margaret Thatcher was brought to power.

After the defeat, Gordon Brown started working as a journalist at Scottish Television and later worked as current affairs editor until his election to the Parliament in 1983. In the 1983 general election, he was elected as a Member of Parliament from Kirkcaldy's Dunfermline East District. Labour Party recorded their one of the worst performances in British Parliamentary Election history and again had to sit in the opposition. He developed a friendly relationship with another Labour Party M.P., Oxford University Graduate, and left-wing lawyer Tony Blair. They shared an office in Westminster, the meeting place of the Parliament.

Gordon Brown held several important positions during this time. In 1985, he became one of the opposition spokesmen on Trade and Industry. He was the Shadow Chief Secretary to the Treasury from 1987 to 1989 and after that Shadow Secretary of State for Trade and Industry, before becoming Shadow Chancellor in 1992. John Smith (1938-1994), Brown’s mentor in the party took over the reins of the Labour Party in 1992. Smith died in 1994 succumbing to a sudden heart attack. Tony Blair stood for the leadership of Labour Party and won the election at the 1994 Party Conference. It was rumored that there was a verbal agreement between Blair and Brown, wherein Brown will control the economic policies and Blair will lead the party.

Labour Party came back to power in the 1997 general election with a resounding victory over the Conservatives ending their 18 years of exile from the government. Tony Blair was elected as the Prime Minister, and he appointed Brown as Chancellor of the Exchequer while announcing his ministerial team on 2 May 1997. Brown eventually became the longest-serving Chancellor of the Exchequer in modern history with tenure of 10 years and two months. The high point of his tenure was he made the Bank of England independent and delivered an agreement on poverty and climate change at the G8 summit in 2005.

In 2005, Labour Party won the general election held in May 2005. In May 2007, Blair announced his resignation both as Prime Minister as well as party leader in the following month. On June 27, 2007, Brown was appointed as Prime Minister of the United Kingdom succeeding Tony Blair. Immediately after his ascension as the Prime Minister of the United Kingdom, he was confronted with some brazen terrorist attacks planned both in London and at the Glasgow airport followed by severe flooding of North England. He deftly handled these unexpected situations in a worthy and dignified manner giving a newfound sense of assurance among the ordinary people.

The worldwide financial crisis of 2008-09, severely dented the credibility of the Brown Government. The severe unemployment and fiscal deficit issues brought down the public image of Gordon Brown, and his popularity started receding. Labour Party lost its majority in the general election held on May 6, 2010. As no party could achieve the majority target, Brown held extensive parleys with the third-place-finishing Liberal Democrats to form a coalition government. However, the negotiation failed, and Brown announced his resignation from the post of Prime Minister on May 11, 2010.

Gordon Brown was involved in a couple of romantic relationships before getting married at the age of 49. He dated journalist Sheena McDonald during his early career days as a journalist. He also had a romantic link up with Margarita, Crown Princess of Romania which dates back to his youthful days at the University of Edinburgh. On August 3, 2000, he married Sarah Macaulay. The marriage ceremony was a private affair and was held at his home in North Queensferry, Fife. Their first child, a daughter, was born prematurely and died in her infancy. The couple was further blessed with two sons, John Macaulay and James Fraser.