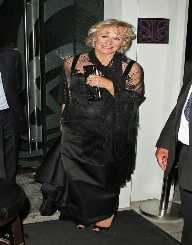 American actress Glenn Close was born in Greenwich, Connecticut on the 19 March 1947 to socialite Bettine Moore Close and William Close, a medical doctor. Close’s formative years were spent living with her parents on a family estate in Greenwich. When she was a child, her parents joined a cult-like movement. Close has four biological siblings and an adoptive brother.

Glenn Close attended school in Switzerland and studied at St George’s School and was later as a pupil at Rosemary Hall Choate Rosemary Hall, NY from which she graduated in 1965.

After leaving the cult, Glenn Close began studying at the College of William & Mary. Her majors were anthropology and theatre.

One of her early appearances was at the Helen Hayes Theatre in the production Love for Love. Afterwards, Close appeared in various plays during the late 1970s and early 1980s including some Broadway productions. She made a few minor appearances on television before in 1980 when she was offered a part in The World According to Garp (1982). This film playing opposite Robin Williams won Close her first Oscar nomination.

Her next film was The Big Chill (1983) and was a financial and critical success. The Big Chill earned Glenn Close an Oscar nomination as well as a Tony nomination and an Emmy nomination. Her next film The Natural (1984) with Robert Redford won her a third Oscar nomination. The Stone Boy(1984) saw her acting alongside Robert Duvall. Her first romantic comedy was in 1985 starring with Mandy Patinkin in Maxie, and she won a second Golden Globe nomination. Glenn Close was going to star with Jeff Bridges in Jagged Eagle (1985) but was replaced after a conflict with the producer.

One of Close’s most successful films was Fatal Attraction (1987) which was a financial success and one of the highest-grossing films of the year. She received an Oscar nomination and won the People's Choice Award for favorite actress. Her next role was in Dangerous Liaisons (1988), and she earned another Oscar nomination plus a BAFTA nomination.

Over a long successful career, Glenn Close has won numerous awards including a Golden Globe for best actress for her role as Eleanor of Aquitaine in The Lion in Winter (2004), and another for her role in Damages (2007). She also won an Emmy Award for outstanding lead actress in a drama series for Damages. Overall, Close had received ninety-one nominations with forty-wins, including six Academy Award nominations.

Glenn Close married Cabot Wade in 1969, and the marriage ended in divorce in 1971. She then married James Marlas in 1984, and they were together for three years before separating. She had a relationship with John Starke, and they had a daughter together before parting ways. She then married David Shaw in 2006.

Glenn Close is involved with some organizations and founded BringChange2Mind to raise public awareness regarding mental illness. Some of the charities she supports are Animal Rescue Foundation, ASPCA, Broadway Barks, Entertainment Industry Foundations, Oceana, Peace Over Violence, Sundance Institute and Waterkeeper Alliance.