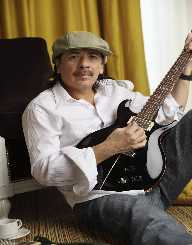 Carlos Santana was born on July 20, 1947, in Autlan de Navarro, Jalisco, Mexico. He became interested in music at a very young age. Santana learned on his own to play violin and guitar just when he was five years old. His father was a big influence on his musical development since he played in a mariachi band.

Santana’s family moved to Tijuana, a city on a border with California. They later moved to San Francisco. Santana graduated from James Lick Middle School and then went on to study at Mission High School, which he graduated in 1965. After high school, he was accepted in California State University and Humboldt State University but chose to pursue a musical career instead of going to college.

When Carlos Santana learned how to play the guitar, he joined several local Tijuana groups. He began to develop his own unique 50s Rock ‘n’ Roll sound. Santana also learned about other musical genres, like jazz and folk music. During the 1960s, Santana was a witness to the growing hippie movement in San Francisco. During that time, he worked in several restaurants as a dishwasher. One of his first major performances was in 1966, when he joined Bill Graham’s Fillmore West after the band’s guitarist Paul Butterfield was too intoxicated to play. The same year, he also formed the Santana Blues Band, later shortened to Santana and was signed to Columbia records. The band was a success and earned a lot of popularity in the San Francisco club circuit.

In 1969, Bill Graham, a fan of the band, arranged Santana to perform in the Woodstock Music and Art Festival. After the festival, Santana became a major hit, and so did their first album Santana. The band received critical acclaim from an international audience. However, there were several disputes within the band about the emphasis of their style. Their second album Abraxas was released in 1970. The album was a mix of several genres, including rock, blues, jazz, and salsa. The best-known hits from the album were “Oye Como Va” and “Black Magic Woman/Gypsy Queen.” The following year, Santana released band’s third album Santana III. During this time, the tensions grew amongst the band members, which was more exacerbated by the use of drugs and alcohol.

In 1972, Carlos Santana began work on his fourth album Caravanserai. He brought in new musicians and replaced several members of the band. The album focused more on jazz fusion sounds and received critical acclaim. The same year, Santana was introduced to meditation and accepted the disciplines of his guru Sri Chinmoy. The following year, Santana recorded an album together with The Mahavishnu Orchestra named Love, Devotion, Surrender. The same year, Santana also released the album Welcome.

Santana collaborated with Alice Coltrane for their 1974 album Illuminations. His albums mostly received positive critical reviews. However, the sales were not doing well. His manager Bill Graham was insisting that Santana returns to the edgy, ethnic sound rather then moving more into jazz. In 1976, the group released album Amigos with strong funk and Latin sounds. The album was a critical and commercial success. Santana also decided to release solo albums, his first being Oneness: Silver Dreams- Golden Reality in 1979 and The Swing of Delight in 1980.

In 1982, Santana’s band began to experience more success with the mainstream audiences. Santana recorded another solo album in 1983, named Havana Moon. His band was trying to appeal more to the pop culture audiences. However, their sales were dropping. The 1985 album Beyond Appearances was a critical, but not a commercial success. The group appeared in the Live Aid concert, proving that they still appealed to the live audiences.

During the 1980s, Santana made several guest appearances and took great pleasure in jamming with several notable jazz artists. He collaborated with group Weather Report, jazz pianist McCoy Tyner and the Grateful Dead. In 1988, Santana reunited with his past group members for a retrospective album of the past 20 years, named Viva Santana!. In 1987, he released a solo record Blues for Salvador. In 1990, Santana left Columbia Records and signed with Polygram.

Carlos Santana released several albums during the 1990s- Spirits Dancing in the Flesh in 1990, Milagro in 1992, followed by Sacred Fire in 1993 and Brothers in 1994. While still struggling with sales, Santana was advised to collaborate with other, younger artists. As a result, the album Supernatural was released in 1999, featuring artists like Everlast, Eric Clapton, Dave Matthews and others. The album's single “Smooth” became a major hit and received critical praise. The album won 8 Grammy Awards and became Santana’s most successful album of all time.

2002 album Shaman followed supernatural. Although the album was not as successful as his previous one, singles “The Game of Love” and “Why Don’t You & I” spent several weeks at the top of Billboard Hot 10 list.
In 2005, Santana released two albums- a collaboration with Herbie Hancock named Possibilities and his band’s album All That I Am. In later years, Santana released his solo album Shape Shifter in 2013, and the following year, his first Spanish language album Corazon.

Carlos Santana met his first wife Deborah in 1972, and the couple married the following year. Their daughter Saunders King is a blues singer. They also had daughters Stella and Angelica. However, the couple divorced in 2007, after 34 years of marriage.

In 2010, Santana became engaged with Cindy Blackman, a drummer. The couple currently resides in Las Vegas.