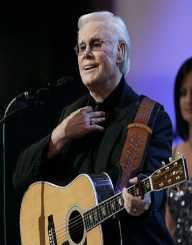 American country singer George Jones was born in Saratoga, Texas in 1931 to George and Clara Jones. He was one of eight children. Given a when he was nine years old and taught himself to play.

George Jones was born into poverty and started his singing career busking to contribute towards the family income. Later he played in clubs and bars in Beaumont, Texas. When Jones was sixteen, he moved to Jasper, Texas where he joined a local radio station KTXJ as a singer.

During the early 1950s, Jones did his military service as a U.S. Marine stationed in San Jose, California. He used this opportunity to play in bars around San Jose in his free time. After his discharge from the military in 1953, he met Pappy Daily of Starday Records who offered him a recording contract. Daily also became his manager. Jones’s first four singles went unnoticed but then in 1955 his recording Why Baby Why was a hit. Other hits followed and by the mid-1950s he was established as a country music star. Around this time he met and played in concerts with Johnny Cash and Elvis Presley. He said that he found Elvis aloof but became lifelong friends with Cash.

In 1956 Jones was inducted into the Grand Ole Opry in Tennessee and in 1959 he had his first number one hit on the Billboard country chart with White Lightning. He changed labels to United Artists in 1962, and his first run with them was She Thinks I Still Care. Jones also recorded a tribute album to Hank Williams and a collection of duets with Melba Montgomery. He signed with Musicor Records in 1964 and had a hit with Walk Through This World With Me (1967). Singles he charted with included Love Bug, Things Have Gone to Pieces, and I’ll Share My World With You.

During the late 1960s, Jones alcoholism became a problem, and he was hospitalized. After he met and married Tammy Wynette in 1969, he changed record labels and joined Epic Records in 1971 so that he would record with his wife. Hits they recorded include We’re Gonna Hold On, Let’s Build A World Together, Golden Ring and Near You. His drinking eventually led to their divorce in 1975. They recorded Two Story House in 1980 and their last album together One was recorded in 1990.

By the end of the 1970s, Jones had not produced a hit for some years, and it seemed his career was waning. He had gained the nickname No-Show Jones because of his unreliability and was committed to a drug and alcohol rehabilitation center in 1979.

Then in April 1980, Jones released He Stopped Loving Her Today, an instant hit which stayed at the top of the country charts for eighteen weeks. The recording earned him the Best Male Country Vocal Performance at the Grammy Awards in 1980. The Academy of Country Music named it the Single of the Year as well as the Song of The Year in 1980. The song’s success meant that Jones’s was re-contracted to CBS Records. There was an HBO television special George Jones: With A Little Help From His Friends. In 1982 A Taste of Yesterday’s Wine with Merle Haggard was released, and he had some hit songs including his last number one hit I Always Get Lucky With You (1984).

Throughout the 1980s and 1990s, Jones had problems with substance abuse which also included cocaine. His fourth wife Nancy Sepulvado helped him quit cocaine and even helped him on the road to leaving alcohol. His last studio album for Epic was You Oughta Be Here With Me (1990). His later albums included Walls Can Fall (1992).

George Jones was awarded the National Medal of the Arts in 2002.

There is the George Jones Museum in Nashville, Tennessee where visitors can view Jones’s awards, guitars, and other memorabilia.

Other awards include the Country Music Association Male Vocalist of the Year 1980/1981. Being inducted into the Country Music Hall of Fame by Randy Travis in 1992 and being selected by The Kennedy Center as an honoree in 2008.

George Jones married Dorothy Bonvillion in 1950, and the couple had a daughter, Susan, but the marriage did not last, and they divorced in 1951. In 1954, Jones married Shirley Ann Corley, with whom he had two sons, Jeffrey and Brian. They divorced in 1968, and he married fellow country singer Tammy Wynette in 1969. They had a daughter, Tamala Georgette. (Their daughter is the successful country singer Georgette Jones). Jones and Wynette divorced in 1975 but continued their musical partnership.

His fourth wife was Nancy Sepulvado whom he married in 1983, and the couple stayed together until his death in 2013. Sepulvado is credited with helping Jones conquer his addictions.

In 1996 his autobiography, I Lived To Tell It All, co-written with Tom Carter, was released.

George Jones had a serious motor accident in 1999 when he crashed into a bridge, was hospitalized and charged with drunken driving. The incident caused him to quit alcohol altogether finally.