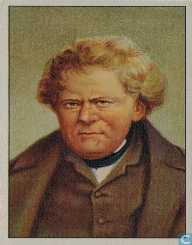 Georg Simon Ohm AKA Georg Ohm was born on March 16th, 1789. He was a renowned mathematician and a German physicist back in the day. During his lifetime, Ohm is credited for his famous discovery of the Ohm’s Law. He invented this law while still working as a teacher. He had been working on the electrochemical cell, an earlier invention by Alessandro Volta. In his research, he found out that there was a proportionate relationship between voltage and electric current. This is what would later be identified by the Ohm’s Law. Ohm passed away at the age of 65.

Georg Ohm was born on March 16th, 1789 in a place called Erlangen, Brandenburg-Bayreuth in Germany. His parents were Protestants by religion. Johann Wolfgang Ohm, his father worked as a locksmith. His mother, Maria Elizabeth Beck, was the daughter of a famous tailor in Erlangen. His parents did not go through any formal education. Nonetheless, this did not prevent Ohm’s father from ensuring that his children were well educated.

In a family composed of seven children, Ohm was among those that survived through to their childhood. Also, his sister called Elizabeth Barbara and brother named Martin managed to survive. Their loving mother also passed on when Ohm was only ten years old.

Martin and Ohm followed their father’s teachings to become skilled mathematicians and physicists later. When Ohm was eleven years old, he was sent to Erlangen Gymnasium where he spent the next four years learning more about science subjects.

Soon, Ohm enrolled at the University of Erlangen. This was in the year 1805. However, he did not entirely focus on his education and was more inclined to other extracurricular activities. This is something that aggravated his father and made Ohm pack his bags to Switzerland a year later. It was while in Switzerland that Ohm worked as a mathematics teacher.

Georg Ohm had the inspirations of learning mathematics afresh from his favorite professor named Karl Christian von Langsdorf. Nonetheless, the professor advised him to continue his mathematics lessons on his own. This later contributed to the departure of Ohm from the school that he was teaching. His new job was to work as a private tutor, and he continued with this for the next two years. In mid-1811, Ohm was back at the University of Erlangen.

With the advice that Georg Ohm took from professor Langsdorf, he managed to focus on his private mathematics studies to the extent that he was ready to be awarded a degree. He went on to receive his Ph.D. degree at the Erlangen’s University in October 1811. This prompted him to seek for a job at the university as a mathematics lecturer. Finding no chance to thrive and grow at the university, he left after teaching for only three months.

In 1813, Georg Ohm accepted another job as a mathematics teacher at one of the schools in Bamberg. Sadly, he still was not happy with the job he was offered. This gave him a reason to turn to writing. He worked on writing a geometry book that would detail his exceptional skills in the field. With time, the school was closed down and was assigned another duty to teach a congested school within the same area.

This gave him time to complete his writing and forward it to the King Wilhelm III of Prussia. This was a good move as he was welcomed to the Jesuit Gymnasium situated in Cologne. The good thing about the school was that it was far much better as compared to other places that Ohm had initially taught. With the facilities offered at the school’s laboratory, this was a chance for Ohm to showcase his mental abilities.

Ohm’s invention of the Ohm’s law was first featured in a famed publication called Die galvanische Kette, mathematisch bearbeitet. In this book, Ohm had taken time to express the theory that he had on electricity. He also went ahead to back his law by claiming that electromagnetic force on any circuit is the resultant product of the current’s strength and circuit’s resistance.