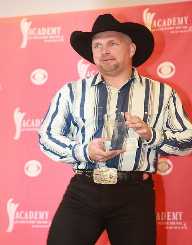 Garth Brooks is a tremendous musician and a great pop-country singer in America. He has managed to break the record by selling more albums than any other musician. As stated by Recording Industry Association of America, Brooks holds the 2nd list of best-selling solo albums artist in the U.S. It wasn’t by chance that all of his songs cemented the top ten charts, but he embraced hard work along the way. As a side note, he used to sell cowboy boots in Nashville before releasing his first song. According to sources, he is the best country music singer who has made history both in the U.S and the world at large.

On 7th February 1962 Troyal Garth Brooks was born in Oklahoma, Tulsa in the U.S.He was born to a draftsman, Troyal Raymond Brooks, and a 1950s country musician Colleen Carrol. Brooks learned to play banjo and guitar at his tender age. Although he was an avid footballer, he used to sing during family gatherings. His athletic skill earned him a scholarship where he went to join the Oklahoma State University in Stillwater. It was here that he joined countable signing clubs as well as attaining local membership at several bars. He graduated in 1984 where he opted to pursue his singing career rather than his athletic skills. One of the entertainment informers, Rod Phelps, noticed Garth’s voice early in the 1980s.It was here that he was moved to Nashville where he recorded his first song.

In the mid of 1989, Garth Brooks released his first album. His first single Much Too Young topped number thirteen on the album chart. He then released his second album titled No Fences that cemented number one in Billboard country music for some time.

In the mid of 1991, Garth released his third album titled Ropin’ the Wind. Several of his singles such as The River and Shameless brought him immense success. The following year, Garth launched his fourth album The Chase. It comprised of songs like Somewhere Other Than the Night and Learning to Live Again.

From 1993 to 1997 Garth released several albums including In Pieces, Fresh Horses; she’s Every Woman among others. He closed his singing career with an album titled ‘Seven.’ Afterward, Garth went to try film industry where he announced his retirement in the new millennium. After a short pause, he started to perform live and as well as recording in 2009.Brooks made his last performance in April 2013 during the annual Academy Award.

Throughout his career, Garth Brooks has earned over fourteen Grammy awards. In 1986 he married Sandy Mahl. The couple was blessed with three daughters: August Anna, Allie Collen, and Taylor Mayne Pearl before calling it quits. Late in 2005, he married Trisha Yearwood, a singer.