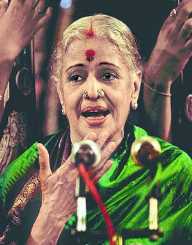 Bharat Ratna M. S. Subbulakshmi was indeed a jewel of India. The Goddess of Perfect Note was a musician beyond excellence. She was also an actor and a singer. The audience would describe her singing as flawless and transcending into a new world. She had an incredibly fulfilling career in Carnatic music and represented India as her cultural ambassador all over the world.

M. S.Subbulakhsmi was born on September 19, 1916, in Madurai. Her full name was Madurai Shanmukhavadivu Subbulakshmi and her star sign was Virgo. Her parents were Shanmukavadiver Ammal and Subramanya Iyer. Music ran into her family as her mother played Veena and her grandmother Akkammal was a well-known violinist.

Subbulakshmi grew up in an environment filled with music and chose the same career path. She was trained in the Carnatic style of music by Semmangudi Srinivasa Iyer. She also learned Hindustani music from Pandit Narayanrao Vyas.

M. S.Subbulakhsmi started playing and singing professionally at only ten years of age. Her first song was  ‘Maragatha Vadivum.’ That same year, she got a taste of stage singing when she was asked to perform in front of an audience. Young Subbu finished her performance quickly to get back to playing with mud – her favorite game at the time. The following year, she began to do regular stage shows and charm everyone with her soulful voice.

Such was her talent that the Madras Music Academy overlooked their strict rules to allow M. S.Subbulakhsmi to perform there. She won thousands of hearts by her performance there. Her notes were so flawless that some even claimed that she carried a veena in her throat.  She was only 17 years old then.

This performance meant the rise of a new star in the Carnatic music and she was also offered film roles beginning with Sevasadanam. She also appeared in films like Sakuntalai, Savithri, and Meera. She also started giving her concerts.

M. S.Subbulakhsmi became one of the leading artists of Carnatic music. She took her performances abroad to mesmerize the listeners. She was recognized as India’s Cultural ambassador for decades and performed at the Edinburg International Festival of Music and Drama in 1963 and the Carnegie Hall in New York at the United Nations General Assembly in 1966. She also performed at the Royal Albert Hall in London in 1982 and Festival of India in Moscow in 1987.

M. S.Subbulakhsmi retired from all public shows and appearances after her husband’s death in 1997.

M. S.Subbulakhsmi was extremely talented. Her expertise was acknowledged through numerous awards and honors bestowed upon her. She received the Padma Bhushan in 1954, SangeetNatakAkademi award in 1956 and SangeethaKalanidhi in 1968.

M. S.Subbulakhsmi donated most of her prize money to charitable organizations. She was also known for raising money for social work through hundreds of charity concerts.

M. S. Subbulakshmi was married to Kalki Sadasivam. Although the couple was without children, they were extremely devoted to each other.
When Kalki died in 1997, Subbulakshmi stopped performing in public.

M.S. Subbulakhsmi passed away on December 11, 2004, in Chennai. The cause of death was heart-related complications. The Government of India introduced a postage stamp in 2005 to honor her memory.