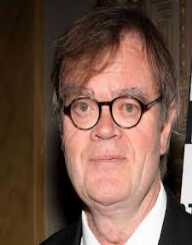 American writer Gary Edward "Garrison" Keillor was born on the 7 August 1942 to John Keillor and Grace Dunham in Anoka, Minnesota. He was one of six children born to the couple.

Garrison Keillor obtained a BA in English from the University of Minnesota (1966). During his time at university, he worked on the student radio station, Radio K.

Garrison Keillor worked for a short time at the St Paul Pioneer Press as a journalist. In 1969, he joined Minnesota Education Radio, now known as Minnesota Public Radio.

He then launched a similar show, The American Radio Company of the Air in New York in 1989. He moved the show to Minnesota in 1992 and resurrected the name to A Prairie Home Companion. In the early 1990s, he also started The Writer’s Almanac, a daily podcast and radio show focusing on literary history and poetry.

Garrison Keillor has published eleven books including Lake Wobegon Days (1985) and three children’s books as well as numerous essays. His advice column for Salon under the title Mr. Blue ran from 1996 until 2001. He published Homegrown Democrat: A Few Plain Thoughts from the Heart of America in 2004. He wrote the screenplay for A Prairie Home Companion. He also appeared in the film.

His show A Prairie Home Companion won a Peabody Award in 1980. In 1988, a recorded version of his book Lake Wobegon Days won a Grammy Award for Best Spoken Word or Non-musical album.  He was inducted into the Radio Hall of Fame in 1994. Then in 2005, The Library of Congress recognized A Prairie Home Companion as a radio show of historical value, and it was added to its audio archive.

Garrison Keillor's wife is musician Jenny Lind Nilsson, and they have a daughter.

In 2018, Minnesota Public Radio fired Garrison Keillor when a co-worker accused him of inappropriate sexual behavior. Keillor claimed that the station had fired him without a full investigation and the station faced outrage from his fans. He claimed that he had been attempting to console the woman by patting her on her back.