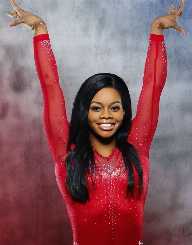 Champion America artistic gymnast Gabby Douglas was born Gabrielle Christina Douglas on the 31 December 1995 in Newport News, Virginia. Her parents are Natalie Hawkins-Douglas and Timothy Douglas, and she is one of four children.

Gabby Douglas showed an interest in gymnastics at a young age, and when she was six, she began taking gymnastics classes. She made good progress and in 2004 won a Level 4 gymnastics title at the Virginia State Championships. When she was 14, she began training with Liang Chow in Des Moines, Iowa. In 2008, Douglas participated in the US Classic in Houston Texas and was awarded 10th place.

Her next competition was in 2010 at the Nastia Liukin Supergirl Cup where she gained 4th place all-around. The same year she took part in the 2010 Cover Girl Classic in Chicago, Illinois where she achieved 9th all-around in the junior division. Then at the U.S. Junior National Championships in 2010, she won a silver medal on balance beam, a 4th place on all-around and on vault plus tied for 8th place on floor exercise. Also in 2010, she participated in the Pan American Championships in México and was part of the gold medal-winning U.S. team as well as the winner of the uneven bars title, being placed 5th all-around.

During 2011, Gabby Douglas won team gold with the U.S. team at the City of Jesolo Trophy in Italy. She also won a silver medal at the CoverGirl Classic in Chicago and at the U.S. Championships in St Paul, Minnesota she was placed 7th all-around.

At the Summer Olympic Games in 2012, Gabby Douglas became the first American to win both team and individual all-around gold in gymnastics at the same games. The Associated Press named Douglas Female Athlete of the Year in 2012.

Gabby Douglas ’ story has been made into a Lifetime biopic film entitled The Gabby Douglas Story. She also had a reality television show, Douglas Family Gold.