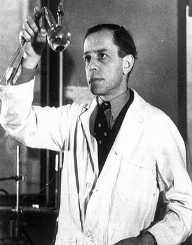 Feodor Lynen was born 6th April 1911, to Wilhelm and Frieda Lynen. He was born in Munich, Germany, and had seven brothers and sisters. His father worked at the Technical University of Munich, as a Professor of Mechanical Engineering.

Feodor Lynen's high school studies were completed at Luitpold-Gymnasium. After high school, Feodor Lynen enrolled at the University of Munich in 1930, to study chemistry. He was fortunate to study under very accomplished professors, one of whom was a Nobel Laureate for Chemistry, Heinrich Wieland. After studying with Wieland, Feodor Lynen took an interest in biochemistry.

During the Second World War, Feodor Lynen continued to live in Germany. In 1942, Feodor Lynen was appointed as a chemistry lecturer at the University of Munich. In 1947 he moved to the position of Assistant Professor, and in 1953, Professor of Biochemistry.

During the 1940s, Feodor Lynen started studying how cells transform simple chemical compounds into complex molecules like sterols and lipids. He began publishing his own scientific papers, and also became aware, around the same time, of Konrad Bloch, who was undertaking similar studies. The two started sharing their discoveries.

In 1949, the first International Congress of Biochemistry was held at Cambridge, in the UK. Scientists came from the world over, although only four scientists from Germany were invited, due to the wash-out after World War II. Feodor Lynen was one of the four.

In the early 1950s, Feodor Lynen wrote about the series of reactions that resulted in cholesterol. He was the first person to describe the chemical structure of “acetyl coenzyme A,” which came to be recognized as a crucial molecule in the metabolism process.

In 1954, he was appointed Director of the Max-Planck Institute for Cellular Chemistry in Munich. The position had been created specifically for him, at the behest of two eminent scientists, Otto Warburg and Otto Hahn.

In 1972, the Institute was merged into the Max-Planck Institute of Biochemistry.

Feodor Lynen wrote over 300 scientific papers, and in 1975, was appointed President of the Alexander von Humboldt Foundation.

Feodor Lynen was bestowed with many awards and honors and held several notable memberships and honorary positions. Some of these included:

1964:   Nobel Prize in Physiology or Medicine (shared with Konrad Bloch)

1965:   Grand Cross of Merit with Star and Sash – Federal Republic of Germany

Feodor Lynen married Eva Wieland in 1937. She was the daughter of his professor in chemistry. They had five children, two sons, and three daughters.