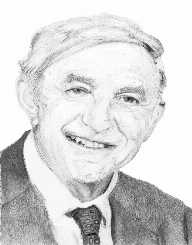 Stanford Moore was born on September 4, 1913, in Chicago, Illinois, USA. His parents were Ruth and John Howard Moore.

As a teenager, Stanford Moore attended the Peabody Demonstration School (now called the Unversity School of Nashville). After graduating from this school, he enrolled in the Vanderbilt University, where his father worked. Here, he was active in both his social life and in his academic life. Stanford Moore joined a fraternity but never forgot to keep up on his studies, which were primarily focused on chemistry. He later graduated from this school in 1935.

After graduating with a bachelor’s degree, he earned a fellowship to continue his studies at the University of Wisconsin. Here, he continued studying chemistry but focused himself on the subject of biochemistry. Stanford Moore later graduated from his school with a Ph.D. in organic chemistry in 1938.

Quickly after graduating, in 1939, Stanford Moore began working at the Rockefeller Institute for Medical Research under Max Bergmann. The focus of the laboratory here was chemistry. While here, Moore worked with many great scientists like William Stein.

When the United States entered World War II, Stanford Moore was asked by the United States government to work as a technical aide for the National Defense Research Council. Here, he worked on several projects, many of which were kept secret, to aid in the war efforts. While working as an aid, he also spent time working with the Office of Scientific Research Development and the Operational Research Selection. He only worked in this position for a couple of years, until the end of World War II, in 1945.

After the war, Stanford Moore resumed working at the Rockefeller Institute for Medical Research. He still worked with Stein but also began working with Herbert Gasser. While here, one of his biggest accomplishments was for his work with amino acids. He found new uses for chromatography (the act of separating mixtures with the use of a solution (liquid) or suspension (gas)). He experimented with chromatography with Stein, which made it easier for them to closely analyze amino acids.

In 1947, Stanford Moore began working as a chairman of the Panel on Proteins of the Committee on the Growth of the Nation Research Council. He kept this position until 1949.

The 1950’s were a particularly productive time for Moore. In 1950, he was working with the University of Brussel, the University of Cambridge, and the Rockefeller Medical Institute. Stanford Moore was also working on the Editorial Board for the Journal of Biological Chemistry. In 1952, he also began teaching at the Rockefeller Institute for Medical Research. In the next year, he took on a position of secretary of the Commission on Proteins of the International Union of Pure and Applied Chemistry. In 1956, he also became a treasurer for the American Society for Biochemistry and Molecular Biology.

In 1957, he stopped working as secretary of the Commission on Proteins of the International Union of Pure and Applied Chemistry. In 1958, he and Stein created an automatic amino acid analyzer. In 1959, he stopped working as the treasurer for the American Society for Biochemistry and Molecular Biology; it was also in this year that Stein and Moore declared that they had successfully analyzed the whole amino acid sequence of a ribonuclease.

In 1970, he became the president of the Federation of American Societies for Experimental Biology.

In 1982, he retired from Rockefeller University.

Stanford Moore was awarded the Nobel Prize in Chemistry in 1972 (shared with Christian Anfinsen and William Stein).

Stanford Moore also earned the Richard’s Medal of the American Chemical Society (1972) and the Linderstrom-Lang Medal (1972).

He was also an honorary member of the American Chemical Society.

Near the end of his life, Stanford Moore was diagnosed with Amyotrophic Lateral Sclerosis (Lou Gehrig’s disease). This condition ruined his health over the years and eventually caused his death. Stanford Moore died on August 23, 1982, in New York City, New York, USA. He was 68 years old when he passed away.