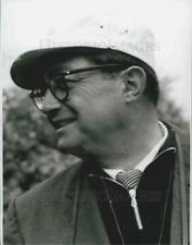 Henry Koster was born on May 1, 1905. He was a German American director and producer. He started his career as a film critic. He made several films in Europe before he immigrated to the United States when Hitler and the Nazis came to power. In the United States, his career grew very fast, and he became a renowned director.

Henry Koster was born on May 1, 1905, in Berlin, Germany as Hermann Julius Kosterlitz. His father deserted him and his mother when he was young. His mother was a pianist. He attended high school in Berlin. He finished high school by writing stories and drawing cartoons for a newspaper. He went ahead to join the Academy of Fine Arts in Berlin.

Henry Koster started his career when he was only sixteen years old. He was an author, cartoonist and a film critic. In 1925, he joined the publicity department of UFA Studios. He graduated later on to become a screenwriter. During the 1930s, he became an assistant director where he was allowed to direct three films under Kurt Bernhardt. In 1926, his screenwriting debut was with ‘Die Waise von Lowood.’ In 1931, Henry Koster worked as a screenwriter for Weib im Dschungel and Seine Freundin Annette.

In 1932, Henry Koster directed his first film ‘Das Abenteur der Thea Roland.’ The following year he directed ‘Das Hassliche Madchen.’ In 1934, he made the movie ‘Peter.’ At that time he also worked for ‘L’Or dans la rue. In 1936, he moved to the United States of America where he changed his name to Henry Koster. He was also signed by Universal. In the same year, he made his first movie ‘Three Smart Girls’ in collaboration with Joseph Pasternak and ‘Maria Baschkirtzeff. In 1937 he directed ‘One Hundred Men and a Girl.’ In 1938, he produced and directed ‘The Rage of Paris.’

In 1939, Henry Koster directed ‘First Love’ and ‘Three Smart Girls Grow Up.’ The following year, he directed ‘Spring Parade’ and ‘One Night in the Tropics.’ In 1941, he left Universal and joined MGM. In 1941, he directed ‘It Started with Eve’ and the following year he produced and directed ‘Between Us Girls’. From 1945 to 1947, he directed ‘Music for Millions,’ ‘Two Sisters from Boston,’ ‘The Unfinished Dance’ and ‘The Bishop’s Wife.’ He later moved to 20th Century Fox where he stayed for the rest of his career. In 1948 and 1949, he directed ‘The Luck of Irish’ and ‘The Inspector General’ plus ‘Come to the Stable’ respectively. He also directed ‘My Blue Heaven,’ ‘Harvey,’ Elopement,’ No Highway in the Sky,’ ‘Stars and Stripes Forever’ and ‘My Cousin Rachel’ among so many other films.

In 1953, Henry Koster made his first movie in cinemascope known as ‘The Robe.’ The following year he directed ‘Desiree.’ In 1955, he directed two films ‘Good Morning, Miss Dove’ and ‘A Man Called Peter.’ He continued to make films such as ‘The Naked Maja,’ ‘Flower Drum Song,’ ‘The Power and the Prize’ and ‘Dear Brigitte’ among so many others. In 1965, he produced and directed his last film ‘The Singing Nun.’

In 1947, Henry Koster was nominated for an Academy Award for the Best Director for ‘The Bishop’s Wife.’ In 1953, he received an Oscar nomination for Best Picture for ‘The Robe.’

In 1936, Henry Koster married Kato Kiraly whom he divorced in 1941. The couple had a son, Robert J. In 1942, he married actress Peggy Moran with whom he had two sons, Nicholas and Peter. He died on September 21, 1988, in Camarillo, California. He died due to complications he developed after liver surgery.