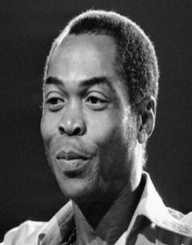 Olufela Olusegun Oludotun Ransome-Kuti popularly known as Fela Kuti was a Nigerian musician, composer, and multi-instrumentalist and human right activist. Born on October 15, 1938, he was a pioneer of the Afrobeat music genre. Fela was very popular within the African music circle and was regarded as one of Africa's most "challenging and charismatic music performers” during the peak of his music career.

Fela Kuti was born on October 15, 1938, in Abeokuta, Ogun State in Nigeria. He was born to Rev Israel Oludotun Ransome-Kuti and Chief Funmilayo Ransome-Kuti. His father was an Anglican minister and school principal and his mother a female activist. His brothers were Olikoye Ransome-Kuti and Beko Ransome-Kuti who both became medical doctors. His cousin was Wole Soyinka, a Nigerian writer and Nobel laureate. Fela Kuti received education early education at Abeokuta Grammar School. In 1958, he was sent to London for medical studies, but upon reaching there, he had a change of mind and decided to study music, which was his passion. He enrolled at the Trinity College of Music.

Fela formed the highlife and jazz band Koola Lobitos, while at the Trinity College of Music. Upon returning to Nigeria in 1963, he reformed the band and trained as a radio producer for the Nigerian Broadcasting Corporation. He later played with Victor Olaiya and his All-Stars.

Fela’s style of music was Afrobeat, which was a fusion of Ghanaian/Nigerian highlife, jazz, funk, and traditional African chants and rhythms. He came up with the Afrobeat music after a visit to Ghana in 1967. Fela and his band traveled to the United States in 1969, spending 10 months in Los Angeles. It was during this time that he learned about Black Panther and its ideologies, and this would influence his musical career and activism through music. He later renamed the band Nigeria ’70 and then The Afrika ’70. His style of music, predominantly in Pidgin English, became very popular in Nigeria and began to penetrate into other African countries. Ginger Baker and Fela recorded Stratavarious, in 1972 alongside Bobby Tench.

In 1969, he released Fela Fela Fela and followed it with Fela's London Scene, Why Black Man Dey Suffer, Live! and Open & Close, all in 1971. He later changed the band’s name to Egypt ’80. With the band, Fela released several albums and toured Europe and American. His works include Black President, Unknown Soldier, Army Arrangement, Beasts of No Nation, Confusion Break Bones, The Best Best of Fela Kuti and The '69 Los Angeles Sessions.

Despite gaining immense popularity in African countries, Fela was unpopular in his home country, especially among government officials. Through his music, he criticized the corruption and other unjust happenings in the Nigerian government and other African countries. Fela formed the Kalakuta Republic, a commune, which contained his studio and housed peopled connected with his band.

He later declared the community as independent from Nigeria. Due to his activism, Kalakuta was subjected to several military rampages. Together with the band Afrika ’70, Fela released the album Zombie, which leased an attack on the Nigerian military and how they followed orders blindly. The album was an instant hit but angered the government. This led to attacks on the Kalakuta Republic, where people in the commune were severely beaten and Fela’s studio set ablaze. In 1978, he held a concert in Accra, Ghana, during which performed the song Zombie. He was since banned from entering Ghana. That did not stop his campaign especially against corruption in the African governments.

Fela Kuti married Remilekun Taylor in 1960. The couple had three children, Sola, Yeni, and Femi. He also married 27 more women in a single wedding ceremony in 1978. Most of these women were his dancers and singers. He later divorced them all. Femi died on August 2, 1997, of AIDS-related complications. His brother Olikoye Ransome-Kuti, broke the news of his death and causes a day after.