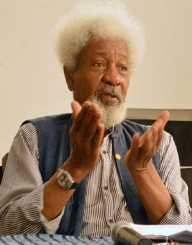 Akinwande Oluwole Babatunde Soyinka was born 13th July 1934, to Samuel and Grace Soyinka. He was born in Abeokuta, Nigeria Protectorate. This area is now known as Ogun State in Nigeria.

At the time of his birth, Nigeria Protectorate was under British rule. He came from a sizeable family, with five brothers and sisters. His father was a school headmaster as well as a minister for the Anglican church, and his mother was a shop owner. His mother was also a political activist.

Soyinka studied at Abeokuta Grammar School, and from there was accepted into Government College in Ibadan, which was one of the most prominent and elite secondary schools in Nigeria.

He graduated in 1952 and then went to University College Ibadan where he studied English literature, Western history, and Greek for two years. In 1954 he wrote a play for radio which was broadcast that same year. Soyinka also founded the first Confraternity with some of his peers called Pyrates Confraternity which was an anti-corruption group.

In 1954, he moved to England to continue with his studies at the University of Leeds. He began writing and working as an editor for a magazine called The Eagle. Soyinka graduated in 1957.

Soyinka wrote two plays, the first was The Swamp Dwellers (1958), the second was The Lion and the Jewel (1959). After receiving interest from the Royal Court Theatre, he moved to London and began work for the theatre. At the same time, his plays were performed in Ibadan. A play that he had written in 1957, The Invention, was produced at the Royal Court Theatre.

Soyinka returned to Nigeria after receiving a grant, a Rockefeller Research Fellowship, from the University College in Ibadan. This was to enable him to research African theatre. He wrote further plays and won an award for one of them. He then established an amateur acting group called the Nineteen-Sixty Masks and concentrated much of his time on the group for the following years. Political unrest grew in the 1960s until there was a military coup and from 1967 to 1969, the country descended into civil war.

Soyinka traveled through Nigeria, continuing to write, and in 1962 he began to teach at Obafemi Awolowo University. He wrote a movie called Culture in Transition which was released in 1963. Soyinka discussed current affairs and was quite critical of the government’s censorship at times.

Late in 1963, he founded the Drama Association of Nigeria in conjunction with scientists and others involved in theatre.

In 1964, Soyinka stepped up his activism by resigning from his position at the university in opposition to the government. He was arrested in 1965, and the charges said he held up a radio station at gunpoint and made them change a tape they were going to play. The tape was a speech accusing certain parties of fixing the election.

He was released several months later after protests by other writers. Soyinka continued to write and had plays released in London at the theatre and on radio. In late 1965, Soyinka became headmaster and senior lecturer at the University of Lagos, in the Department of English Language.

Soyinka continued to be politically active, and in 1967 he went into hiding after meeting with the military governor. He was sent to prison for almost two years and wrote many poems and essays during this period continuing to criticize the government. His plays continued to be produced and performed during his incarceration. He was released from prison in October 1969 when the civil war was officially over.

Soyinka moved to Paris for a time where he had a friend living on a farm, and he spent time alone writing. He returned to Nigeria later that year and returned to the role of headmaster.

He wrote Kongi’s Harvest which was released in 1970 as a play and was adapted to a movie soon after. Soyinka also traveled to the U.S. with actors from the Ibadan University Theatre Art Company.

Soyinka continued to write and release works, but in April 1971, he resigned once again from his position at the university due to the political landscape in Nigeria. He concentrated on his writing and regularly released works.

He lived in Ghana for a time where he was editor for a magazine called Transition, and in 1975 he returned to Nigeria and once again took up his position at the University of Ife.

As well as continuing to write, Soyinka established an acting group called the Guerilla Unit which worked with local communities. Between 1975 and 1984, Soyinka continued to be politically active.

In 1994, Soyinka had to flee Nigeria and went to the U.S. He had been charged with treason by General Sani Abacha.

In 1993, the International Parliament of Writers (IPW) was established for writers that were being persecuted. Soyinka was president from 1997 to 2000.

Among his many awards and honors, Soyinka has the following:

1990:   Benson Medal awarded by the Royal Society of Literature

In 1958, Soyinka married Barbara Dixon, a British writer. The couple had a son but divorced.

His second marriage was to Olaide Idowu in 1963. She was a Nigerian librarian. They had three daughters and a son, but once again, the marriage ended in divorce.