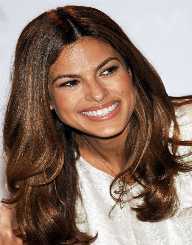 Eva Mendes was born on March 5th, 1974. Her place of birth was in Miami, Florida. She is of Cuban descent. Her film career got a boost after acting alongside Denzel Washington in the movie Training Day - 2001. Several other films hit that she has featured in include Stuck on You and Hitch which were released in 2003 and 2005 respectively.

Eva’s beautiful and charming looks have also gained her recognition with favorite magazines such as People and Maxim. In addition to acting in movies, Mendes has also played key roles in advertisements for brands like Calvin Klein and Revlon.

Eva de la Caridad Mendez was born in 1974 in Miami, Florida. Her parents Juan Carlos Mendez and Eva Perez Suarez are both of Cuban descent. While she was 10, her parents divorced, and she had to move to Los Angeles with her mother.

When Mendes was young, she dreamed of being a nun. Later, this changed when one of Hollywood’s casting agents came across her pictures in a friend’s portfolio. During this time, she as studying marketing at California State University situated in Northridge. She quit school to chase her dreams.

Mendes’ film career took off in 1998 after featuring in Children of the Corn V: Fields of Terror and A Night at the Roxbury. These movies were both released in 1998 with Mendes starring in them. Later that year, she acted in Mortal Kombat: Konquest - 1998. My Brother the Pig came in 1999, and it was followed closely by Urban Legends: Final Cut in 2000.

Eva Mendes’ film career was given a significant boost while acting alongside Denzel Washington in Training Day - 2001. The interest of the public came about as a result of a nude scene she appeared in a while working this movie. After this media exposure, she became a public figure. In 2002, Revlon approached her to act as their spokesmodel. After this, she featured in All About the Benjamins.

In 2003, Eva joined Washington starring in Out of Time. After her career breakthrough, they acted in some movies within a short period. They include 2 Fast 2 Furious, Stuck on You and Once Upon a Time in Mexico. In these hit films, she was acting together with Hollywood stars with the likes of Paul Walker, Matt Damon, and Johnny Depp.

In 2005, Eva Mendes acted with Will Smith in the movie Hitch. This was a romantic comedy which became a major hit for both minor actors during this time.

Other films that Mendes has landed a significant role in include: The Wendell Baker Story, Trust the Man, Ghost Rider, and We Own the Night. These movies were released in 2005, 2006, and 2007 respectively.

In 2007, Calvin Klein made use of Mendes impressive and sexy looks in their advertisements. In recent years, Mendes is still active in her acting career with hit films like The Other Guys - 2010, Fast Five - 2011 and Girl in Progress - 2012.

Eva Mendes had a long relationship with George Augusto, a filmmaker from 2002 and it came to an end in 2010. After this, she went on to date Ryan Thomas Gosling, a famous actor in 2011. The couple has two daughters Esmeralda Amada Gosling and Amada Lee.

In 2016, a rumor was that Eva Mendes and Gosling got married to each other secretly.