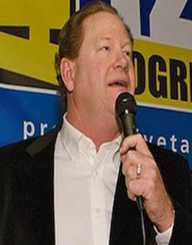 Edward Andrew Schultz is famous for his talk shows and controversial political stands.

Edward Andrew Schultz was born to George and Mary Schultz of Norfolk Virginia. His birth date is January 27, 1954. His parents were strict academicians, with his father being an aeronautical engineer and mother an English teacher. He enrolled at Larchmont Elementary School. In high school, Schultz was an avid American football player. After his graduation from Maury High school, he secured a sports scholarship from Minnesota State University.

While playing for his college, Ed Schultz dreamed of becoming a professional footballer. He joined the Oakland Raiders in 1977. Two years later, he transferred to Winnipeg Blue Bombers.

Ed Schultz' footballing career never lasted for long. He left it for sportscasting in North Dakota. At the age of 34 in 1988, he started with media stations. At first, he aired for KVLY TV, and later to WDAY TV. Schultz went on to work for various radio and television stations from 1998 to 2003.

During his sport casting days, fans nicknamed him “Voice of the Bison.” This one came true when a fan threw a plastic bottle into his broadcasting booth. Schultz was so provoked that he went out after his assailant, to teach him something on discipline. He also doubled his sports anchoring, with guest talk shows on the radio station KFGO.

Ed Schultz turned his eye entirely on the radio talk show business. Schultz remotely transported his listeners from the cities to the everyday life of the rural underserved. Most Americans were oblivious of the struggles of the rural poor. His show was viewed as an eye opener by most city dwellers.

Schultz was combative in his talk show as he was in football. His shows were very emotive with rightwing conservative politics. He never shied away from an intellectual fight. In his shows, he clearly stated his stand on various diverse issues. Most journalists tended to be neutral; Schultz always had a position on almost everything. His style of show moderation made him one of the top-ranked show hosts in America. This also made KFGO one of the top-ranked radio stations.

In 2003, Ed Schultz started a radio show on WDAY Radio. The Ed Schultz Show proved as dynamic as his earlier shows. Only that this time around, he was more liberal leaning. The change of heart came about after seeing the suffering of the poor that the Republicans never talked about. His show was broadcasted by WDAY Radio until his exit in 2005. That year, he moved to Democracy Radio in New York. This gave him more coverage with an audience of over 100 radio houses tuning in.

He eventually moved again in 2009 to MSNBC. He stayed at the station until 2014.

Ed Schultz was a natural fighter. His bare-knuckle comments landed him in trouble. He once was forced to apologize for calling a high profile guest a Republican slut. He was sued in court for libel by an MSNBC producer. The presiding judge vindicated him.

His political views were also in question. Schultz was never a sycophant of any party. He swung from being a conservative to a liberal as he deemed fit. One of his most controversial stands was the issue of abortion. Though a practicing Christian, he supported the abortion law contrary to his faith.

Ed Schultz was married to his first wife in 1980. Her name was Maureen Zimmerman. The couple had three children. They eventually divorced in 1993. He then remarried in 1998 to Wendy Schultz. The union was ended by his death in 2018.

Despite being known for his radio personality, Ed Schultz was also an actor. He featured in films like The Campaign, and Warehouse 13.

Ed Schultz died on July 5, 2018. His death which occurred in Washington DC was said to have been out of natural causes. His contribution to the radio industry was immense. He was feted for his efforts by various organizations. Some of the awards are 3 Sevareid Awards, 2 Marconi Radio Awards, and 1 George Foster Peabody Award.

He was a political maverick. His politics of the day depended on what the issues were. Schultz endorsed a candidate not on party lines, but on the campaign promises. He was fiercely independent.