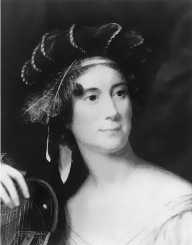 Rachel Jackson was born on the 15 June 1767 in Pittsylvania County in the Colony of Virginia, British America. Rachel Jackson was the daughter of Colonel John Donelson and Rachel Stockley. Her family were early settlers in Tennessee, and her father was a co-founder of Nashville.

Rachel Jackson was initially married to Captain Lewis Robards (m.1787). The marriage was unhappy, and they separated in 1790. Andrew Jackson arrived in Nashville in 1788 and initially boarded with the Donelson family. After her marriage broke down amidst talk of domestic violence, Jackson returned home and assumed that her husband had applied for a legal divorce. She then fell in love with Andrew Jackson and the couple married. It was later discovered that Jackson was still legally married to Lewis Robards which made her marriage to Jackson bigamous. After the scandal broke, the Robard divorce was finalized, and Andrew and Rachel made their marriage legal. The Jacksons did not have children but they adopted three boys and fostered eight others. The first child they adopted was one of the twin sons of Rachel’s brother Severn Donelson. They named the boy Andrew Jackson Jr. (1808-1865). The couple then adopted a Native American child who had been found on a battlefield next to his deceased mother, Lyncoya (1811-1828). The third child they adopted was Andrew Jackson Hutchings (1812-1841), a grandson of Rachel’s sister.

Rachel Jackson died on the 22 December 1828 of a heart attack at their home, The Hermitage. Rachel Jackson died between the time her husband was elected the 7th President of the United States of America and his inauguration.  Andrew Jackson was President from 1829 until 1837.

Of Scottish ancestry on her father’s side, Jackson was brought up in the Presbyterian faith.

The scandal surrounding the bigamy and remarriage which caused Rachel Jackson considerable embarrassment and stress. Her husband claimed at her funeral that he blamed his political enemies for his wife’s early death.

A 1951 historical novel by Irving Stone depicted Rachel Jackson as the main character. The book was adapted for a film script in 1953 and starred Susan Hayward as Rachel Jackson and Charlton Heston as Andrew Jackson. The Rachel Jackson State Office Building, built in Nashville Tennessee in 1985 was named in her honor.