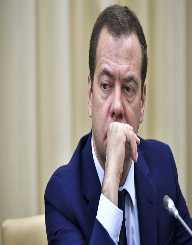 Dmitry  Medvedev is a Russian politician and the current Prime Minister of Russia. Born on September 14, 1965, he came to office in 2012 and has served since. He is also a former President of Russia serving from 2008 to 2012 after the current President, Vladimir Putin, had finished his first two terms as president from 2000 to 2008. During Medvedev presidency, Putin had also served under him as the prime minister. Medvedev was seen as more liberal than Putin during his presidency. During his term as president, he rolled out modernization programs that sought to reform Russia economically and socially and reduced the country’s dependence on oil and gas. It was during his tern that Russia recovered from the Great Recession and won the Russo-Georgian War.

Medvedev was born on September 14, 1965, in Leningrad of the then Soviet Union. He was the only child of Anthony Afanasyevich Medvedev and YuliaVeniaminovnaMedvedeva (née Shaposhnikova). His father was a chemical engineer who taught at the Leningrad State Institute of Technology, and his mother taught Russian at the Herzen State Pedagogical University and later a tour guide at Pavlovsk Palace. Medvedev was an intelligent student growing up, and his interest grew across various subjects.

Medvedev enrolled at theLaw Department of Leningrad State University (now St Petersburg State University)to pursue law at the age of 17 in 1982. He had previously wanted to study linguistics but later said pursuing law was fascinating saying he was lucky "to have chosen a field that genuinely interested him and that it was really 'his thing." Medvedev participated in various sporting activities including weight lifting and rowing. His colleagues described himas very diplomatic and correct person who presented his arguments in debates without offending but firmly. He graduated in 1987 along with his later associates Konstantin Chuychenko, Anton Ivanov, and Nikolay Vinnichenko. After graduating, he accepted three budget-funded post-graduate studies to becomea civil law chair. He graduated with a Candidate of Sciences degree in private law in 1990 with a dissertation titled, "Problems of Realisation of Civil Juridical Personality of State Enterprise."

In 1988, Medvedev joined the democrat campaign team of Anatoly Sobchak who was one of his professor at the university. Sobchak was an astute democratic politician during the 1980s and 1990s. Medvedev served as the de facto head of the campaign team that was successful in earning Sobchak a seat in the new Soviet parliament, the Congress of People’s Deputies of the USSR. In 1990, he served as a consultant to City Hall’s Committee for Foreign Affairs when Sobchakwas elected Chairman of the Leningrad City Council. Vladimir Putin was the head of the committee.

Academic Career And Others

Medvedev served as a docent at Leningrad State University (St Petersburg State University) teaching civil and Roman law. He will be in that position until 1999 and co-wrote three-volume civil law textbook for universities first published in 1991. He also collaboratedwith friendsIlya Yeliseyev and Anton Ivanov to found the law consultancy firm. He served as the legal affairs director of Ilim Pulp Enterprise (ILP), in St. Petersburg in 1993 and later bought 20% of the company's stock. He sold the shares in 1999.

When Vladimir Putin became the Prime Minister of Russia in 1999 under Boris Yeltsin, he brought in Dmitry  Medvedev into his circles and gave him a top government position. He served as the campaign manager for Putin during the 2000 Presidential elections, which Putin won by 52.94%. During Putin’s administration, he appointed Medvedev as the Chairman of the board of directors for Gazprom in 2000. He became the presidential chief of staff replacing Alexander Voloshin in 2003.  Medvedev also served as the First Deputy Prime Minister of Russia in 2005.

United Russia elected Medvedev as the presidential candidate for the party at its congress on December 17, 2007. Putin also endorsed his candidature, which became a strong arsenal for his campaign. Medvedev won the election by 70.28% and elected president on March 2, 2008. He officially took the Presidential oath on May 7, 2008, to become the third President of the Russian Federation. He then appointed Vladimir Putin as the Prime Minister of Russia. Ruling the country with a powerful and popular politician like Putin, the media named Medvedev’s administration as "government by tandem" or "tandemocracy." During Medvedev administration, Russia faced two threatening events including the financial crises and the 2008 South Ossetia war.

With instructions from Medvedev, Russia successfully launched an attack against Georgia, who had on attacked separatist of South Ossetia and Abkhazia on August 7 and 8 2008. Georgia’s attack killed several Russian peacekeepers andSouth Ossetians with Russian citizenship. Medvedev in a statement said the act was an act of aggression against Russian peacekeepers and the civilian population in South Ossetia and therefore retaliated the attacks. The Russians retaliated the attack, which pushed the Georgians out. South Ossetia and Abkhazia gained independence after the confrontation with the peace deal brokered by the French and EU President Nicholas Sarkozy.

Just like many other countries, Russia was affected by the global financial crises in 2008. The recession became one of Russia’s worse in history as their GDP fell by over 8% in 2009. The government steps in by releasing trillion rubles (more than $40 billion U.S. Dollars) to save troubled banks and lend $50 billion to troubling companies. Medvedev administration was able to stabilize the in 2009.

Medvedev also launched a modernization programme that sought to reform the country economically and socially and reduce Russia’s reliance on oil and gas revenues. He also initiated an anti-corruption campaign, which was aimed to fight the rampant corruption in the country. Medvedev also made some reforms in the country’s educational sector.

Prior to the 2012 presidential election, Medvedev proposed to United Russia that Putin is elected to contest as the party’s candidate for the election. Putin won the elections and chose Medvedev as the Prime Minister of Russia. He is currently serving his second term of office since May 8, 2918.

In 1982, Dmitry Medvedev married his high school sweetheart Svetlana VladimirovnaMedvedeva. They have a son Ilya Dmitrevich Medvedev. He is an ardent listener of British hard rock with favorites being Pink Floyd, Led Zeppelin, Deep Purple, and Black Sabbath. He loves swimming and has reserved two hours each day for it and practices yoga.

Medvedev was awarded the Order of St Sava, the highest award of the Serbian Orthodox Church for "his contribution to the unity of the world Orthodoxy and his love to the Serbian people."