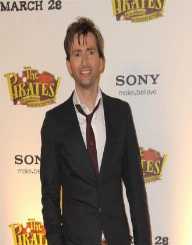 David Tennant is famously known as a Scottish actor who has graced the film industry in a blockbuster kind of way. He is the kind of person who is destined to play any given character and genre. He can appear on radio, CD, a small screen as well as big screen. You can never predict Tennant’s acting skills; he is best at what he does. He aspired to be a famous actor since his childhood days. Till now David has spanned in the industry for 18 good years. He has taken more than fifty roles in both series and movies.Tennant is an early bird riser; he has managed to receive multiple awards especially in a popular sitcom “Doctor Who.”

On April 18, 1971, David John McDonald was born in Scotland, Bathgate in the United Kingdom. At the age of three, David loved to watch television comedies and movies with his siblings, Karen and Blair. He loved to watch British sci-fi movie known as Doctor Who. He took the time to play the Doctor whose role that he even insisted on having a well-knitted doll. At the age of 11 Tennant's talent caught Edith MacArthur attention. He was invited for an audition at Royal Scottish Academy of Drama and Music which he passed without doubts. He was the youngest actor to enroll in the American Actors Union. David came to change his second name to Tennant since his other name (McDonald) appeared in the American Actors Union.

David started his acting roles by appearing in several commercials including The Resistible Rise of Arturo Ui as well as Scottish television series in 1994.Afterward, he took several roles at the Shakespeare Company. In 1996 he received the RSC role production of ‘As You Like It.’He continued to increase his role both on television on great programs such as Casanova and Blackpool. He followed it up with Goblet of Fire, Mike Newell’s Harry Potter, and Fry’s Bright Young Things. He began to rise into recognition around the globe and the United Kingdom.

In 2005 David played the 10th role of Doctor that made him play Doctor Who TV program in the BBC. It was later recorded in the Guinness World Records as the best and longest science-fiction television show. The program has a British pop-culture background that directly cements Tennant’s fame. For his perfect role, he was given a chance to direct not one but several follow-up episodes. Tennant’s talent was recognized by the Critics’ Choice Awards, thanks to his best performance in both of the Shakespeare and Hamlet for the RSC.

David dated Sophia Myles for two years. In 2007, David’s mother died of cancer which made him join three Associations for International Cancer Research. He married Georgia Moffet, and the couple has a daughter called Olive. He also agreed to adopt Tyler, Moffet’s son. Tennant hates to share his personal life with the public. He loves to go to church when not at work.