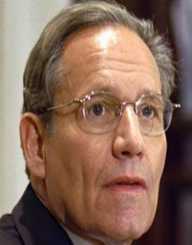 Born on 26th March 1943, Bob Woodward is an investigative journalist. He is remembered for a story he did on President Nixon's dealings on Watergate in 1973. This story led to the resignation of the U.S president.

Bob Woodward was the son of Jane and Alfred Eno Woodward II, who was a judge in the Judicial Circuit Court. Woodward grew up in Wheaton in Chicago. It was thought he would follow his father's footsteps into the legal profession.

Bob Woodward got a scholarship under the Naval Reserve Officers Training Corps to study in Yale College, where specialized in History and English Literature. While in college he was a member of Phil Gamma Delta fraternity. He completed his course in 1965; he then began his career as a communication officer in the U.S Navy.

He was offered admission in Harvard Law School after his five years as a lieutenant, an offer he declined. He chose to apply for a job at a Washington Post. While in his two weeks trial at The Washington Post, he took short courses in International Relations and Shakespeare in Washington University.

Despite Bob Woodward's application to work with The Washington Post being declined, editors of the paper referred him to Montgomery County Sentinel, where he worked with the paper for a year. His breakthrough came when he together with Bernstein did an investigative segment touching the highest level of the United States government.

His name then became a household name associated with investigative journalism. He was promoted to an assistant managing editor of The Post Newspaper in 1979.

Bob Woodward's book The President's Men, become the highest selling at that time. The book was later produced as a movie. Former CIA Robert Gates once stated that he regretted not recruiting Woodward into the CIA. In 1976, he published another book, The Final Days. To date, Woodward has managed to release a total of 19 books.

Bob Woodward lives in Georgetown in Washington D.C. He has been into three marriages. In 1966, he was engaged to Kathleen Middlekauff, his high school girlfriend. Their marriage ended in 1969.

In 1974 to 1979, he was married to France Kuper. His last marriage was with Elsa Walsh. The two had two children together, Taliesin and Diana.

Bob Woodward has received several awards including, Heywood Broun award in 1972. His investigative reporting in 1972 earned him Worth Bingham Prize.

Most of his reporting does not have a clear source of information. Some people have criticized his books for his use of long passages with no clear direction.

In her book The New York Review of Books, Joan Didion, criticized Bob Woodward for often giving irreverent details, failing to draw a comprehensive conclusion and being judgmental in his reports.