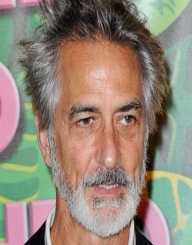 David Strathairn is a Scottish American film actor mostly acclaimed for his roles in epic movies like Lincoln.

David Russell Strathairn was born to into the family of Thomas Scott and Mary Strathairn. His birthday is recorded as January 26, 1949. The San Francisco born actor was the second born in a family of three siblings.

He attended Redwood High School. Upon completing his high school in 1966, he enrolled at Williams College in Massachusetts. Strathairn graduated from the college in at the age of 21. It was in college that he got the acting passion. He was an active member of the college theater group. Together with other students like John Sayles and Gordon Clapp, they forged an indivisible partnership that lasted years after the school days

David Strathairn relocated to Florida. He was to live at his grandfather’s place. Unfortunately, his grandfather died before he settled in Florida. Alone and jobless, he joined a local circus college. Soon after, he was with a circus group on its tours.

The clown business did not last for long. Soon afterward, David Strathairn was on the road looking for employment. Strathairn settled in New Hampshire. He started acting theater with a local playhouse. In one of the performing tours with the group, Strathairn met his former schoolmate. His reunion with John Sayles turned his fate for the better. Sayles was now a film producer.

Sayles gave Strathairn his first role in film acting. He debuted in the movie Return of the Secaucus 7. The Sayles’ directed film was produced in 1980. His star gradually started rising in the film world.

For the next four decades, David Strathairn continued taking roles in numerous films. He was best known for the many appearances in the supporting characters. Up until the 1990s, he featured in films directed by his erstwhile friend John Sayles. After Return of the Secaucus 7, he got a role in Love Sick. This 1983 production was followed by Silkwood in the same year. In 1984, he featured in two films; Iceman, and The Brother from Another Planet. 1988 was a revamp in his acting career. That year, Strathairn did four movies. In the 1980s alone, he appeared in 13 films.

The following decade, Strathairn attracted the attention of many filmmakers. His ability to blend in any supporting role had him appear in over 20 productions in the 1990s. The most notable productions are City of Hope done in 1991, Passion Fish which was done in 1992, LA Confidential produced in 1997, and Limbo produced in 1999.

The year 2005 was arguably the most fulfilling season for Strathairn. He got numerous nominations for his lead acting role in the movie Good Night and Good Luck. In 2007, he acted in The Sensation of Light. He was also a co-producer in the film.

Throughout the years, David Strathairn continued to star in epic movies. The culmination of the film Lincoln is an example. In this 2012 film, Strathairn got 13 nominations from various film organizations. Out of them, he won two. These were Granito Movie Award for Best Actor, and Volpi Cup for Best Actor.

He also took up the role of Franklin Roosevelt, the former US President in the 2017 movie Darkest Hour.

Away from the Hollywood setups, David Strathairn also made several television appearances. From his television debut in 1984, he has appeared in over 36 movies and series. He played Robert Oppenheimer in the 1989 television movie Day One. Robert Oppenheimer was an American scientist credited, among others, for the production of the atomic bomb.

David Strathairn got married to Logan Goodman in 1980. The couple has three children. The family lives in their residence in Poughkeepsie, in New York.

The apple never falls far from the tree. This is an Anglo-Saxon saying, which David Strathairn proved wrong. All his parents were medical practitioners. Tradition would have dictated him to follow suit. Strathairn chose acting instead of medicine. The fulfillment he got in the acting arena transformed him into a film genius. Everything has a humble beginning. Strathairn began as a clown, graduated to a supporting actor. Finally, he became a lead actor in many successful films.

Though not an active political critic, he was tasked to introduce US Presidential candidate Barrack Hussein Obama in 2008. This was at the Democratic National Convention. Obama, the son of Kenyan father and American mother, went along to win the elections.