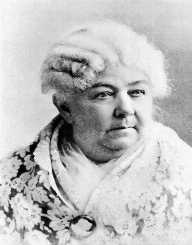 Elizabeth Cady Stanton was born on November 12, 1815. Her parents had 11 children, but six of her siblings died in childhood. Her father Daniel was a Federalist attorney and served in the United States Congress. He later became circuit court judge and New York Supreme Court justice.

Her father introduced young Elizabeth to the law, and she enjoyed reading law books and debating with her father’s law clerks. Her mother was a tall and strong woman, but the loss of so many children made her depressed. She mostly did not take care of her living children.

Stanton was a slave owner, and one of his slaves Peter Teabout took care of Margaret and her father. Slavery ended in New York in 1815.

Elizabeth Stanton was formally educated, which was not common for women in her era. When she was 16 years old, she enrolled in Johnstown Academy and studied Latin, Greek, mathematics, as well as religion and science. She enjoyed intellectual competition with her classmates. During her years at Johnstown, she won several academic awards and honors.

After graduating from Johnstown, Stanton encountered female discrimination. Many of her classmates, who she had surpassed academically went to study at the Union College that she could not attend due to her gender. Instead, she enrolled in the Troy Female Seminary in New York.

Elizabeth Cady Stanton met Henry Brewster Stanton when she was involved in the temperance and abolition movements. He was a journalist, orator against slavery and later became an attorney. The couple married in 1840. They had seven children together.

After their honeymoon in Europe, Stantons moved to Boston, where Henry joined a law firm. Elizabeth enjoyed the social and political intellectual stimulation and often attended abolitionist gatherings. Elizabeth and Henry were equals, but they often disagreed on various topics, counting her notion of female suffrage. Nevertheless, they had a happy marriage which lasted for 47 years.

Elizabeth Stanton enjoyed motherhood but at times felt depressed because of lack of intellectual companionship. Stanton became involved in the community and 1848 established ties to similarly minded women in the area. She was committed to the women’s rights movement and wanted to engage in activism.

Elizabeth Stanton became allies with Lucretia Mott, who she had met earlier at the World Anti-Slavery Convention in London in 1840. At the convention, male delegates voted that women should not be able to participate in proceedings. In 1848, Stanton, Mott and several other women organized the Seneca Falls Convention. There, Stanton made a speech modeled on the United States Declaration of Independence that women and men are created equal. At the convention, she proposed several things, including women’s right to vote.

After her first convention, Elizabeth Stanton became a keynote speaker at several women’s rights conventions. In 1868, at the Women’s Suffrage Convention in Washington D.C. gave a persuasive speech, pointing out the destructive force of males and need for the increase in women’s rights.

After the Civil War, Stanton and her associate Anthony lobbied against ratification of 14th and 15th Amendments, which granted African American men the right to vote. They believed that if more men in the country were allowed to vote, they would vote against women’s rights.

Her efforts were heard, and in 1866, Elizabeth Stanton and several other activists drafted a petition demanding the right to vote without gender or race discrimination. However, the 14th Amendment was passed without adjustments in 1868, followed by passing of the 15th Amendment in 1870.

After the passing of both amendments, Elizabeth Stanton took the position that women are in fact allowed to vote since the fourteenth amendment defines citizens as “all persons born or naturalized in the United States and the subject of jurisdiction thereof.” Her argument later became known as “the new departure” in the women’s rights movements.

Elizabeth Stanton was active on numerous women’s rights issues, including acceptance of interracial marriage. She also wrote influential books, documents and several speeches, like the 1876 book History of Woman Suffrage in six volumes. She also wrote the two-part book The Woman’s Bible and her autobiography Eighty Years & More: Reminiscences.

Elizabeth Stanton died of heart failure in her home in New York in 1902. 18 years after her death, women were finally given rights to vote in the United States. She was buried at the Woodlawn Cemetery in the Bronx. Her ideas received a lot of attention years after her death.

Her house in Seneca Falls was declared a National Historic Landmark in 1965, as well as her home in Tenafly, New Jersey. In 1999, a documentary about Stanton and Anthony was released: Not for Ourselves Alone: The Story of Elizabeth Cady Stanton & Susan B. Anthony.