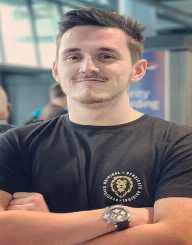 David Spencer was born on January 29, 1992. He was born in Halifax, England. Nothing much has been provided about his parents and siblings He is a British You Tuber and social media personality. He is twenty five years old and a Vlogger as well.

David Spencer began his career like any other You Tuber. He created a YouTube account where he would post videos of him playing Minecraft games. He ventured into YouTube in 2012, and since then he has not stopped posting videos online. He is popularly known as ‘Squid.’ When he was in school, he was nicknamed Squidward, a character from the series Sponge Bob Square Pants. He was called Squidward because of his grumpy nature, and the name stuck, and so he is referred to as ‘Squid.’

David Spencer created a YouTube channel known as ‘iBallisticSquid’ where he started posting videos like any other ordinary You Tuber. With time the channel managed to reach a hundred subscribers, and so he decided to up his game and started posting videos that would interest and draw people to what he posted. He posted his first vlog which made his channel leap from only five thousand subscribers to two million subscribers in less than a year. His channel became popular among the general public from 2014 to date.

David Spencer's channel went ahead to have almost one million subscribers every year. He also loves posting Minecraft videos which are enjoyed by his fans. He makes hilarious videos which impress his fans. He makes videos that enable people to relax during their busy schedules. His videos also make people’s days as they are hilarious to watch. He never goes wrong on the videos that he posts. He likes playing Minecraft games, and at times he offers tutorials on how to play the game.

David Spencer loves playing and exploring Minecraft. The mods and challenges that he hosts attract a large fan base to him. He is friends with AshDubh and Joseph Garret with whom he makes hilarious playthroughs. David and his friends love playing together and exploring what games have to offer. They spend most of their time playing games and then posting their sessions on David’s YouTube channel. They have a very close bond with each other that at times they are referred to as the ‘Project X’ of the gaming world.

David loves experimenting with games, and this draws young gamers to him as they admire him and do what he does. He is, therefore, a role model when it comes to gaming to the young gamers. He is social and friendly, and he loves involving his fans in whatever he does. What he likes most about being a You Tuber is the fact that he makes people smile and brighten their days when they are low. He loves to make people feel at peace by posting videos that help them relax and laugh. He involves his fans in game designs that are complex and him together with his fans always figure a way out.

In 2016, David Spencer announced the launch of his own game known as ‘Keepy Ducky.’ He created the game from an idea that he formulated while playing with his other Minecraft friends. His game is available on Google Play, and it has a rating of 4.8 stars meaning that is a good game. The game is time consuming due to its amazing features. It is an excellent way of keeping busy when one is idle with nothing important to do. The game is also available in Apple’s iOS App Store.

David is dating fellow You Tuber Carly who is also known as ‘Sketchasaurus.’ He has three cats namely, Willow, Ollie, and Church. He has two dogs, Lilly and Marley and a tarantula by the name Calypso. He loves his pets very much, and they love him back.