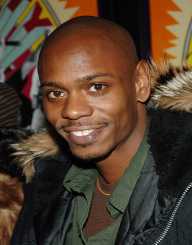 Dave Chappelle is an award-winning stand-up comedian and actor wildly known for his shows on Comedy Central ‘Chappelle Show’ and films such as ‘Robin Hood: Men in Tights’ and ‘Half Baked.'

Dave Chappelle is the youngest of three children of parents William David Chappelle III and Yvonne Chappelle born in Washington D.C on August 24, 1973. He was brought up in Silver Spring where he attended Woodlin Elementary School.

After his parent’s separation, Dave Chappelle lived with his mother in Washington and made summer visits to his father in Ohio. Later on, he enrolled in Duke Ellington School of Arts where he studied theatre arts and graduated in 1991.

After finishing his studies, Dave Chappelle moved to New York City where he pursued Comedy and performed at Apollo Theatre in a stage performance titled, ‘Amateur Night.’ Although he received negative criticism on stage, he continued making his performances in the city’s parks.

At the age of 19, Dave Chappelle performed as ‘Ahchoo’ in ‘Mel Brook’s Robin Hood: Men in Tights’ and competed three times on Star Search. During the same period, he got an offer to play as Benjamin Burford in ‘Forrest Gump’ but turned down the offer accepting a role in ‘Bowl of Pork’ and a support role in the film, ‘Getting In’ in 1994.

In 1995, he guest appeared in ‘Home Improvement’ an ABC sitcom film which earned him a spin-off titled,’ Buddies.’ However, the show had its cancellation after five episodes following poor ratings in 1996. After the failure of the show, Dave Chappelle played as a night comedian in ‘The Nutty Professor’ which had Edie Murphy playing the lead role. The movie's success led to his minor role in ‘Con Air’ in 1997 followed by a stand-up performance in an HBO’s Comedy Half-Hour.

In 1998, he performed in the sixth season of the episode ‘The Larry Sanders Show’ in ‘Pilots and Pens lost’ and co-wrote alongside Neal Brennan ‘Cult Stoner Film, Half Baked’ which he played the leading role. During the same year, he appeared in ‘You’ve Got Mail’ followed by Martin Lawrence film, ‘Blue Streak.'

Notably, Dave Chappelle made his first HBO special, ‘Dave Chappelle: Killing Them Softly’ which he performed in Washington D.C in 2000 followed by an appearance in a racial satire ‘Undercover Brother’ in 2002.

Gleefully, he made his show debut called ‘Chappelle’s Show’ on Comedy Central which featured musical performances by hip-hop and soul artists and works of other black comedians such as, Paul Mooney and Charlie Murphy. His show’s popularity attracted a contract with Viacom Company which required him to perform sketches such as ‘Rick James Sketch ‘in 2004.

Dave Chappelle also performed his comedy special ‘Dave Chappelle: For What It’s Worth’ at Fillmore Auditorium in San Francisco alongside other idols such as Lenny Bruce and Robin Williams. The comedy aired on Showtime; however, he left abruptly during the production and took a trip to South Africa. By September 18, 2004, Chappelle produced and starred in a documentary ‘Dave Chappelle’s Block Party’ which had musical performances from artists such as Kanye West and The Roots.

From February- March 2006, he took several tours to promote his film, ‘Block Party All-Stars Featuring Dave Chappelle’ which had its release on March 3, 2006, by Universal Pictures. In April 2007, he made a stand-up record at the Laugh Factory Sunset Strip Comedy Club and made guest appearances on ‘Inside the Actors Studio ‘series in 2008 and 2013. Additionally, he made an appearance at a comedy Jam at San Francisco in August 2011.

In August 2013, Dave Chappelle made a performance in the comedy act, ‘Flight of the Conchords’ and took part in the Odd Comedy & Curiosity Festival followed by an appearance at Oddball Festival in 2014. Also, he made a ten-night performance in New York City on shows such as, ‘The Today Show,’ ‘The Tonight Show’ and ‘Late Night with David Letterman.'

A year later, he performed Chiq-Raq in ‘Spike Lee’ film followed by a hosting debut on ‘Saturday Night Live’ in 2016. Then, he made Netflix release of two of his comedy specials in March 2017 at Hollywood Palladium that had most views on Netflix.

Dave Chappelle converted to Islam in 1998. Later on, he married Elaine Mendoza Erfe in 2011, and the couple has two sons named Suleyman and Ibrahim, and a daughter Sanaa.

Dave Chappelle received two Emmy Awards and Nominations for a controversial show that addressed race relations. By and large, he won an Emmy Award in September 2017 for his guest appearance on ‘Saturday Night Live.’