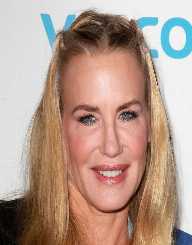 Daryl  Hannah is an American film actress and environmental activist known for her role as Pros Stratton in Blade Runner, 1982. Born on December 3, 1960, she made a screen debut in the supernatural horror film The Fury in 1978. Hannah has appeared in films including Splash, 1984, Roxanne, 1987, Wall Street, 1987, Steel Magnolias, 1989 and Kill Bill. The latter won her a Saturn Award.

Daryl Hannah was born on December 3, 1960, in Chicago, Illinois to Susan Jeanne Metzger and Donald Christine Hannah. His father owned a barge and Tugboat Company while his mother was a producer and former teacher. He had two siblings Don and Page Hannah and later a half-sister. After the divorce of her parents, her mother married a businessman, Jerrold Wexler, with whom she had a daughter Tanya Wexler. Daryl Hannah grew up with his siblings in Long Grove, Illinois. Growing up she gained a strong passion for acting. Hannah was educated at Francis W. Parker School during which she was involved in sports including soccer. She continued her education at the University of Southern California, studying acting, and ballet.

Daryl Hannah made a film debut playing the role of Pam in the horror film The Fury in 1978. She then turned down several roles but came back with the role of Loretta in Hard Country, 1981 and as Cathy Featherstone in Summers Lovers in 1982. In 1983, she appeared alongside Rachel Ward in the horror film The Final Terror. Some of her early works include Splash, 1984, The Pope of Greenwich Village, 1984, The Clan of the Cave Bear, 1986, Legal Eagles, 1986, Wall Street, 1987 of which she won a Razzie Award.

Aside from appearing in films, she has also done some theatre worked and directed some films. In 2000, she reprised the role of Marilyn Monroe in The Seven Year Itch at West End, London. She received positive acclaims for the role. She is the writer and director of the short film The Last Supper. She also directed, act as the cinematographer and producer of the documentary, Strip Notes, broadcast on Channel 4 in the UK and on HBO.

Daryl Hannah is a devoted environmentalist and has a weekly video blog, DHLoveLife, which addresses sustainable solutions. To live by what she preaches, her home is built with green materials and runs on solar power. Hannah also drives a biodiesel fuel car. As part of Operation Musashi, she joined the crew of Sea Shepherd Conservation Society aboard the MV Steve Irwin in December 2008. Daryl Hannah along with actor Taran Noah Smith was arrested on June 13, 2006, for their involvement in the protest against the eviction of farmers and subsequent destruction of the urban farm in the US in South Central Los Angeles. For three weeks, she chained herself to a walnut tree at the South Central Farm. The property new owner Ralph Horovitz sought to build a warehouse on the area.

On June 23, 2009, she protested against mountaintop removal in southern West Virginia of which she was arrested alongside 30 other protesters. Ones again, she was arrested on August 30, 2011, in front of the White House for her involvement in a protest against proposed Keystone oil pipeline from Canada to the United States. Hannah was arrested for criminal trespassing and subsequently jailed in Wood County, Texas on October 4, 2012.

Daryl Hannah has won several awards including Best Supporting Actress at Saturn Award for Kill Bill,2004, Influencer of the Year Award from the National Biodiesel Board, 2004 and Ongoing Commitment Award for Environmental Media Award, 2004. She also has Environmental Activism from Water Quality Awards, 2006, and Activist Awards for Environmental Preservation, 2006.