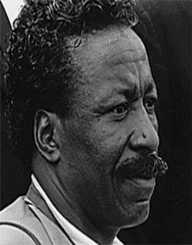 Gordon Parks was an American photographer, film director, and author.

Gordon Roger Alexander Buchanan Parks was born in the town of Fort Scott, Kansas, on November 30, 1912. His parents’ names were Jackson and Sarah. They owned a farm. He had fourteen siblings. His mother died when he was a teenager. After her death, he moved around and lived with different relatives. He began to live on his own at the age of 15. He had to work many different jobs to make ends meet.

Gordon Parks taught himself how to take photos at the age of 25. His first paid work was for a clothing store in Minnesota. He was soon spotted by the wife of the boxer Joe Louis. She encouraged him to move to Chicago. He opened up a business there for portrait photography. He mostly worked with wealthy women. He was also a freelance fashion photographer.

Parks began to take photos of the black ghetto in Chicago. One of these exhibitions got him a fellowship with the Farm Security Administration. That was a government agency that fought poverty during the Great Depression. He started his job there in 1941. He worked under the photographer Roy Stryker. He took photos of African-American workers and struggling families. After that, he worked with the Office of War Information. He photographed an all-black group of Air Force fighters. He then went to New Jersey to document industrial workers in the Standard Oil Company.

Gordon Parks soon moved to New York City. He became a freelance photographer for Vogue magazine. He created different editorials. In 1948, he got a full-time position at Life magazine. He stayed there for over two decades. He documented fashion events, sports events, and Broadway plays. He took portraits of celebrities such as Barbra Streisand and Muhammad Ali. He travelled around the country, and he took photos of segregated areas and the Civil Rights Movement. He also became one of the co-founders of Essence magazine.

Gordon Parks wrote several biographical books, such as To Smile in Autumn and A Choice of Weapons. He published a few collections of poetry, including Arias of Silence and Glimpses Toward Infinity. He also published collections of essays and rules of photography.

Parks was a consultant for several Hollywood films. He directed a few documentaries on life in the ghetto. In 1969, he directed the film adaptation of his book The Learning Tree. In 1971, he directed and wrote the popular film Shaft. It started the genre of Blaxploitation, which mocked the negative stereotypes about African Americans. The next year, he directed its sequel.

Gordon Parks played the piano in different establishments. He composed a few jazz songs and concerts. In 1989, he composed a ballet dedicated to Martin Luther King. He also created oil paintings and held an art exhibition in 1981.

In 1933, Gordon Parks married Sally Alvis. They were together until 1961. From 1962 to 1973, he was married to Elizabeth Campbell. From 1973 to 1979, he was married to Genevieve Young. He was also involved with the socialite and heiress Gloria Vanderbilt for many years. He had two sons, Gordon Jr. and David, and two daughters, Leslie and Toni.

Gordon Parks died of cancer on March 7, 2006. He was 93 years old. He passed away in Manhattan, and he was buried in Fort Scott.

Gordon Parks got Lifetime Achievement Awards from the Congress of Racial Equality and the Jackie Robinson Foundation. He received more than 20 honorary degrees and doctorates. In 2002, he was inducted into the Photography Hall of Fame.

The Gordon Parks Foundation was created in the village of Pleasantville, New York. It preserves his work, and it gives scholarships to art students. The Gordon Parks Museum was established in Fort Scott, and it serves a similar purpose. His work is also held in the Library of Congress, the National Archives, the Smithsonian Institution, Wichita State University, and Kansas State University.