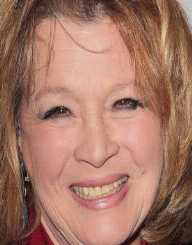 Angie Dickinson is an American television and film actress. Born on September 30, 1931, she had an acting breakthrough with the film Gun the Man Down in 1956. The multiple award-winning actress is also known for the Western film Rio Bravo in 1959 and the NBC crime television series Police Woman as Sargent Lean "Pepper" Anderson. Angie Dickinson received a Golden Globe Award for New Star of the Year for the role in Rio Bravo and the Golden Globe Award for Best Actress-Television Series Drama for Police Woman.

She made an acting debut in 1954 with playing as a party guest in Lucky Me. Since then she played several minor roles until the breakthrough with Gun the Man Down. She has since starred in more than 50 films and several other television movies and miniseries. Her works include The Sins of Rachel Cade, The Killers, The Chase, and Big Bad Mama.

Angie Dickinson was born Angeline Brown on September 23, 1931, in Kulm, North Dakota. She is the second of four daughters by Fredericka (née Hehr) and Leo Henry Brown. Her father worked as a newspaper editor for Kulm Messenger and the Edgeley Mail. The Brown family moved to Burbank, California when she was ten years. There, she graduated from the Bellarmine-Jefferson High School in 1947. She was a brilliant student winning the Sixth Annual Bill ofRights essay contest in 1946.

Angie Dickinson worked as a secretary at the Lockheed Air Terminal in Burbank now the Bob Hope Airport. She contested and won a beauty pageant in 1953 and became the first runner-up. This came with acting opportunities, and therefore she decided to pursue an acting career. She appeared as a guest-star in the variety show The Colgate Comedy Hour. She made a television debut in an episode of Death Valley Days in 1954, and this was followed by minor roles in productions like Matinee Theatre, City Detective, Gray Ghost, Broken Arrow, Meet the McGraw, Tombstone Territory and the Restless Gun among others. Playing several minor television roles, Dickinson had her debut-starring role in Gun the Man Down, 1956 alongside James Arness and then China Gate in 1957.

Angie Dickinson had an acting breakthrough with a lead role in the film Rio Bravo, co-starring Dean Martin, Walter Brannan, and Ricky Nelson. She then became a hit and most sort for actress in the industry. In 1960, she played a supporting role in Ocean’s 11 alongside Sinatra and Dean Martin. She then played roles in films like A Fever in the Blood, 1961, The Sins of Rachel Cade, 1961, Jessica, 2962 and in the Dark Comedy Captain Newman, M.D. z in 1963. In 1964, she played in The Killer opposite future U.S. President Ronald Reagan.

In all Angie Dickinson has appeared in over 50 films and numerous television productions.

Angie Dickinson has had affairs with people like John F. Kennedy, Dean Martin, and Frank Sinatra. She has been married twice first to former football player Gene Dickinson in 1952. The couple divorced in 1960 but she chose to keep the “Dickinson.” Her second marriage was to Burt Bacharach in 1965. A year after their marriage, they had a daughter Lea Nikki who committed suicide on January 4, 2007, at age 40. Nikki was born prematurely, had visual impairment, and diagnosed with Asperger syndrome. Dickinson and Bacharach divorced after 15 years of marriage.

Angie Dickinson has won awards like the Golden Globe Award for New Star Actress of the Year, 1960, Golden Globe Award for Best Actress in a Drama Series in 1975 and Saturn Award’s Best Actress for Dressed to Kill in 1980. She was honored with Star on the Hollywood Walk of Fame for her contribution to television in 1987. In 1989, she was awarded a Golden Boot Award for her c contributions to Western cinema.