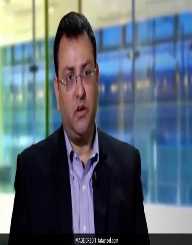 Cyrus Pallonji Mistry was born on July 4, 1966. He is an Irish entrepreneur. He served as the chairman of Tata Group from 2012 to 2016. Tata Group is a major Indian business conglomerate. His administration as chairman was however faced with a lot of controversies.

Cyrus Mistry was born on July 4, 1966, in India. He was born to Pallonji Mistry who was an Indian construction magnate and Patsy Perin Dubash. He was brought up alongside three siblings, Aloo, Laila and Shapoor Mistry. His father belonged to a Parsi Indian business family which was known as the Shapoorji Pallonji Group. His grandfather bought shares in Tata sons and in 2011 his father became the largest shareholder in the Tata Group. He attended Cathedral and John Cannon School in Mumbai where he received his early education. He later joined the Imperial College in London where he graduated with a BE in Civil Engineering. He later enrolled at the London Business School to pursue his Master’s Degree. He graduated with a Master’s Degree in management. He also obtained a Bachelor’s Degree in Commerce from Mumbai University.

In 1991, he became the director of the board of Shapoorji Pallonji and Company. In 1994, he was appointed as the managing director of the Shapoorji Pallonji Group. His father on the other hand was the chairman of the group. His father also sat on the board of the Tata Group. Cyrus also served as the director of Tata Elxsi Limited from 1990 to 2009. He was also the director of Tata Power Company Limited, a post he held up to 2006. He was a Senior Vice President of operations and planning at the Convergence Media Private Limited India. He was also the Senior Vice President of Business Development and Technology of DQ Entertainment (International) Limited. His father later retired from Tata Group and in 2006, he joined the board of the Tata Sons.

He was also the chairman of the Tata Chemicals Limited and Tata Consultancy Services Limited. He was also the director and chairman of the Board of Shapoorji Pallonji Group. He was a director of several companies that fell under the umbrella of the Shapoorji Pallonji Group such as Cyprus Investment Limited among others. In 2016, controversies started cropping up of how Cyrus had no vision to develop the Tata Group. In the same year, he was removed as the chairman of the Tata Group. Ratan Tata who was the former chairman took over as the Interim Chairman.

In 1992, Cyrus married Rohiqa Chagla with whom he has two sons. Rohiqa is the daughter of Iqbal Chagla who is a famous lawyer in India.