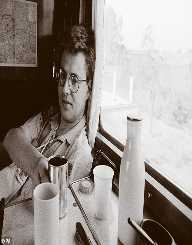 Stieg Larsson was a Swedish author and journalist born in 1954. Most of his journalism career took place in Stockholm. His work Millennium trilogy which was published after he died earned him much fame and credit.  The series was based on crime stories.  One of the books in the series was The Girl Who Kicked the Hornets' Nest which came to be the top selling book in 2010. His interest in writing developed at a young age. When he was 12, he was presented with a typewriter as his birthday gift. This motivated him to start writing.

In 2008 Stieg Larsson was position two in the world among the bestselling authors. Khaled Hosseini took the first position. Unfortunately, Stieg Larsson did not live long enough to witness the success of his work. Even after his death, his books were still among the best sellers worldwide.

Stieg Larsson was born on August 15th, 1954. His place of birth was in Skelleftehamn, Sweden. His father Erland Larsson was a communist and worked in a smelting plant known as Rönnskärsverken. His mother Vivianne Larsson, on the other hand, was a Social Democrat.

His father’s job involved handling dangerous chemicals. He later became a victim of arsenic poisoning hence quite his job. The family then moved to Stockholm but left Larsson to be cared for by his grandparents. Severin Boström was his grandfather, a devoted political activist.

Stieg Larsson spent his childhood in Bjursele in the County of Västerbotten together with his grandparents. This is where he took his early education. His grandfather faced confinement during World War II when he was nine years old. He was forced to rejoin his parents who by then lived in Umea.

Stieg Larsson’s first work was mainly based on science fiction. He participated actively in science fiction fandom that was for Sweden in 1971. It took place in Stockholm. This marked his first science fiction participation. In the early 1970s, he mainly wrote short stories, and some appeared in amateur magazines.

Stieg Larsson was greatly influenced by the political participation of his grandfather when he was living with him. He was a role model to the young lad he was then. He, therefore, came to write political and journalistic books and left aside fictional ones. In 1974 he was inducted in the Swedish Army where he was trained to be a mortarman in Kalmar. This was in the infantry unit. During his participation in the Vietnam War, he wrote books based on the war.

In 1977 he served in a Swedish agency known as Tidningarnas Telegrambyrå as a graphic designer. He became a journalist at the agency after a while and left in 1999. He worked in other places from them and in 1995 co-founded the magazine namely Expo. He was the chief editor of this magazine that was Swedish antiracist for the rest of his life.

Stieg Larsson was in a committed relationship with Eva Gabrielsson from 1972 but never married her. She was an architectural historian. According to Swedish law; couples who intended to marry had to announce their union publicly. Stieg Larsson who had received death threats sometimes did not want to risk announcing his relationship.

Stieg Larsson was heading to his office when he realized that the elevator was not working and he took the stairs. This strenuous climb led to a heart attack and his death on November 9, 2004, at the age of 50.