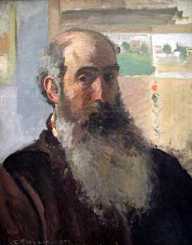 Born on July 10, 1830, Camille Pissarro was an impressionist and neo-impressionist painter. The Danish-French national is recognized for his contributions to the betterment of Imperialism. Having followed the footsteps of great painters like Gustave Courbet and Jean-Baptiste-Camille Corot, he brought together 15 impressionist artists to develop and explore other themes.

At age 54, Pissarro took an interest in neo-impressionism and therefore understudied George Seurat and Paul Signac. He became the only artist to have exhibited his works eight times at the Paris Impressionist exhibition between the years of 1874 to 1886. Referred to as the dean of Impressionist painters, Camille Pissarro was like a father to other painters because of good interpersonal relationships and in-depth knowledge in his field of work.

Jacob Abraham Camille Pissarro was born to Frederick and Rachel Manzano in St Thomas and had three other siblings. He attended the Savary Academy a boarding school in Passy near France. During his school days, he was enthused with the French art masters and gained interest in arts. His schoolmaster, Monsieur Savary helped him build on this interest by taking him through drawings and paintings. He was then encouraged to take inspiration from nature and draw from it.

Pissarro heeded to this advice and practiced it upon his return to St Thomas. Despite his interest in arts, his father also had another vision for him. He wanted him to become part of his business and was given a job as cargo clerk. Pissarro always made sure he took his tools to work and practiced whenever he was free. So for the five years of being in his dad’s business, he never stopped drawing.

Pissarro later came into contact with a Danish artist Fritz Melbye, who convinced him to take on painting as a profession and offered to be his teacher. He vacated his position and traveled with Melbye to Venezuela. The two worked as an artist there and bearing in mind Monsieur Savary’s advice, Pissarro included landscapes, village scenes and other nature in his paintings.

Two years of his stay in Venezuela, Camille Pissarro moved to Paris to work with Anton Melbye, brother to Fritz Melbye. There he acted as an assistant to Anton and studied works of other painters. He studied the works of Courbet, Jean-Francois, Charles-Françoise Daubigny, Millet, and Corot. To improve on his skills, he took on some classes at the Academie Suisse and Ecole des Beaux-Arts but later found the lessons boring, so he looked for alternatives. He then consulted one of the artists he had previously studied, Corot, to help him out which he accepted.

After gaining lots of experience and meeting classification, he debuted at the Paris Salon exhibition in 1859. Camille did lots of painting with inspiration from Corot. Between 1870 and 71, Pissarro moved to Norwood because he couldn’t join the army during the Franco-Prussian War due to his Danish nationality.

Camille Pissarro did lots of painting works at Norwood and Sydenham, including the view of St. Bartholomew’s Church also known as The Avenue Sydenham, The Crystal Palace, Norwood Under the Snow and Lionello Venturi. Between the year 1890 and 1892, he moved to France and London frequently to paint landscapes.

Upon his return to France, Camille Pissarro noticed that most of his paintings he left behind had been destroyed. Out of the over 1500 paintings, he had only 40 of them. Most of the damaged paintings were believed to have impressionist style. Impressionist painting has always been described as a brainchild of Pissarro by some critics. Pissarro then planned to have a competition and alternative for Salon to help them display their style contrary to Salon’s classification.

Pissarro brought together 15 Impressionist artists to form the Société Anonyme des Artistes, Peintres, Sculpteurs et Graveurs in 1873. Being the pivotal figure of the group, Pissarro did not impose himself on them but came to their level to work cordially. The group held its maiden Impressionist Exhibition in 1974 and was met with lots of critics. Their new developed theories were faulted and criticised as an insult to the craft of the traditional artist. The style shifted from the traditional portrayal of historical and religious to common places and lifestyle settings.

Camille Pissarro later found the impressionist theme boring and searched for different themes during the 1880’s. This was probably the end of the impressionist movement. He went back to his youthful style of painting. He was now painting the lives of country people and local settings. His current work came with negative critics, but to Pissarro, it was aimed at educating the public. He said he wanted to do a realistic painting than idealizing ones.

Pissarro also abandoned the neo-impressionist style, saying it was very artificial and came out with the pointillism, which he developed with Georges Seurat and Paul Signac. He spent about three years 1985 and 1988 practicing this new technique. After mastering it, he showcased some of his works at the Impressionist Exhibition in 1886. He adopted other styles in his subsequent works.

Critics described Camille Pissarro as an outstanding painter among his group. He was also termed as the most real and naïve member by Armand Silvestre. His later works were described as that of dignity, sincerity and durable which distinguished his person by Diane Kelder, a historian. Mary Cassatt, who was once a member of the Imperialist, described Pissarro as one who could teach “the stone to draw.” Though Pissarro sold few of his work in his lifetime, posthumously his works have been sold for millions at auctions.

One of Pissarro’s lost oil painting in 1897 Rue St. Honoré, Apres Midi, Effet de Pluie was found at hanging in Museo Thyssen-Bornemiszaa Madrid government’s museum. Even though the US embassy requested the return of the paint, it was declined. His other works like the Quai Malaquais and Printemps was also stolen. Others like Le Boulevard de Montmartre, Matinée de Printemps done in 1897 was found in the Israel Museum in Jerusalem.

Camille Pissarro married his mother’s maid Julie Valley in 1871 and had seven children. The couple lived in Pontoise and later moved to Louveciennes. He died on November 13, 1903, in Paris.