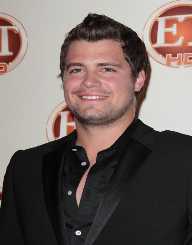 Levi Keith Johnston is an American actor and model. Born on May 3, 1990, he is the former fiancé of Bristol Palin and the father of their child Tripp Easton Mitchell Johnston-Palin, born in 2008. He came into the limelight in August 2008, when Bristol’s mother, Sarah Palin who was then US vice presidential candidate announced that her daughter was carrying the child of Johnston and that they were engaged. After their relationship ended, bothfamilies engaged in several public hostilities. Johnston started his career working in oil fields in Alaska. He later pursued a pursued a career in the entertainment field as an actor and model. His book, Deer in the Headlights: My Life in Sarah Palin's Crosshairsis based on his relationship with the Palins.

Levi Keith Johnston was born on May 3, 1990, in Wasilla, Alaska as the child of Keith and Sherry Johnston. His younger sibling is Mercede "Sadie" Johnston. He received education at Wasilla High School, where he joined the school’s hockey team. He laterdropped out from school without graduating. His family has been going through their own challenges. Johnston’s mother battled prescription drug addictions. Both parents also struggled financially and during this time, he lived in the house of the Palins.

After dropping out of school, Johnston worked as an apprentice electrician on the Alaska North Slope oil fields. He left the job in January 2009. Johnston after gaining popularity with his relationship with Bristol decided to launch a career in the entertainment industry. He pursued to become an actor and model. He appeared in a television commercial for Roll International in October 2009. He has also appeared in Playgirl magazine.

On September 2011, he published the book, Deer in the Headlight: My Life in Sarah Palin's Crosshairs. He was a celebrity coach to Logan Cummins in the pilotof the television reality show "Mansformation" in May 2013. Johnston in August 2010 announced he would contest the mayoral election of Wasilla, Alaska, but later rescinded the decision.

Johnston and Bristol met while at the Wasilla High School and started dating. Their relationship grew very deep that Johnston tattooed Bristol’s name on his finger when a promise ring he gave her went missing during a caribou hunt. In 2008, Sarah Palin was selected as the running mate of Senator John McCain for the US presidential election. It was during this time that she announced that her daughter, Bristol was carrying the child of Johnston and that they were engaged and preparing for their marriage. There were rumors that Johnston is being forced into the marriage but he came out to deny that fact saying, "We were planning on getting married a long time ago with or without the kid. That was the plan from the start." their child Tripp Easton Mitchell Johnston was born in December 2008.

In March 2009, the couple fell apart and broke their engagement. Two months later, they came announced that their relationship was back on track and would raise their child together. Bristol later filed a case to have the sole custody of the child and child support.

The couple reunited in July 2010 and engaged for the second time. However, the relationship again ended on the rock, as they broke up three weeks later. After their breakup, Johnston came out with several allegations and accusations against the Palin family. The two families for a time engaged in accusations and counter-accusations resulting in animosity between them.