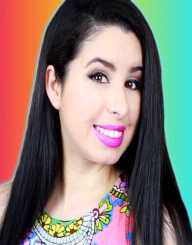 Cloecouture is a famous YouTuber and vlogger, who posts entertaining and informative videos on fashion and makeup. Cloecouture has a very successful YouTube channel called `cloecouture.’ Starting out in 2011, the channel rose to fame real quick and was featured in an article in Wall Street Journal during the same year. The report shed light on makeup tutorials which Cloe was very famous for at the time.

Cloecouture is often hardworking and dedicated to her channels and perceives them as her little business. Apart from her videos Cloe also markets herself through other social media platforms and made a cameo appearance on the Today show. Also, Cloe has a personal clothing line called GLO by cloture.

Cloecouture was born on 23rd June 1997, in Florida USA. Cloe has two sisters, namely Saige and Mia. Saige is elder while Mia is younger, and her sisters feature in Cloe's videos often. Cloe’s mother passed away in February 2016 when she succumbed to cancer after an extended illness period of about 17 years. Cloe claims that a mother always encourages her to live life to the maximum, and she strives to do just that.


Rise to fame and career

Cloecouture is a beauty star on YouTube with an ever-growing fan base. However, things have not always been smooth with Cloe. In December 2011, Cloe's channel was hacked and her posts deleted, and she lost her subscribers and millions of views. Also, Cloecouture started another channel called `Vivalacloe’ which faced the same problem, but the YouTube support team was able to help her recover the account’s details.

From Cloecouture's early days in school, she was a shy person and found it difficult to make friends. Cloe loved to make up and to apply it made her feel better about herself. Cloe confesses that she would find it very difficult to do the things she does in her videos in front of even five hundred people. Cloe has a huge fan base which serves as motivation to keep doing what she does best.

More so, many girls draw inspiration from Cloecouture DIY videos, and they help them overcome their difficult times. Cloe confesses that she would also face difficult times while in high school, and would watch some YouTube videos to make herself feel better. Hence, Cloe has a perfect understanding of what she means to her viewers, and this inspires her to do better. At a certain point, some of Cloe's posts were deleted by Instagram due to their nudity policies. However, Cloecouture condemned this act and reacted by reposting the picture.

Cloecouture resides in Los Angeles, California. Currently, studies at UCLA, pursuing a degree in business and economics. Cloe is friendly with many famous YouTubers and often associates with the likes of Sarai Jones in the production of her videos. During the 2012 issue of Wall street journal, she has featured alongside Sarai Jones but was not known her yet.