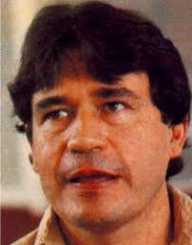 Drug lord Carlos Lehder was born on the 7 September 1949 in Armenia, Colombia. His father, Wilhelm Lehder was a German engineer with Nazi sympathies who left Germany and settled in rural Columbia during the 1930s. His mother was Colombian and a qualified school teacher. Lehder Snr was on the U.S. Embassy’s watch list in Colombia during World War II.

Carlos Lehder moved to the United States in his mid-teenage years where he got involved in petty crime. He was convicted of smuggling 200 pounds marijuana in a stolen vehicle and was sentenced to two years in jail (1973). In prison, he became acquainted with George Jung, who was a drug dealer. During their incarceration, the pair started hatching plans on how to smuggle cocaine from Colombia into the United States by the planeload.

Carlos Lehder and Jung started working for Escobar, handing the transportation and distribution of cocaine into the United States. Escobar supplied the cocaine from his Colombian laboratories. The route Lehder and Jung first used was flying the cocaine from Colombia via Nassau in the Bahamas. To enable them to use this route, they bribed local officials in the Bahamas.

As their operation grew, Lehder purchased Norman’s Cay, an island 363kms/225 miles from Miami, Florida. By this stage, his partnership with Jung had disintegrated. The island was soon an important base of Lehder’s drug operations and also became a meeting place for those associated with him, including parties and celebrations.

Business Insider later reported that Carlos Lehder had started a Neo-Nazi type group that protected the arrival of the drugs ruthlessly. Between 1978 and 1980, Lehder controlled the smuggling operation from Norman’s Cay, the biggest operation in the Caribbean. He was raided by the DEA in 1980 and had to escape to Colombia.

After leaving Norman’s Cay, Carlos Lehder settled down in Armenia where he went into politics. He founded the National Latin Movement, a Neo-Nazi style party and began doing various political stunts to draw attention to it. He also attracted the attention of authorities, and the Colombian National Police began to raid his properties.

The police uncovered millions of U.S. dollars plus Neo-Nazi memorabilia and documents, including photographs of Adolf Hitler. In Norman’s Cay: The True Story of Carlos Lehder and the Medellin Cartel, author Tamara Inscoe-Johnson is quoted as saying Lehder modelled himself on Hitler and that his goal was nothing less than world domination. Part of his plan was to become president of Colombia.

Escobar was already irritable with Carlos Lehder because his flamboyant lifestyle which drew attention to their operations and he began to consider him a liability. When Lehder killed one of Escobar’s paid assassins, Escobar leaked Lehder’s whereabouts to authorities which led to his arrest and extradition. On the 4 February 1987, Lehder became the first person to be extradited to the United States under a recent treaty signed between Colombia and the US.

He was imprisoned for life without parole in 1988.