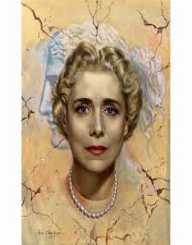 Clare Boothe Luce was an American playwright, writer, and served as the Italian delegate in behalf of the US Nation during President Eisenhower’s administration. She was the first woman in Congress to be awarded the Presidential Medal of Freedom in 1983 bestowed by President Ronald Reagan.

Clare Boothe Luce was married twice in her life of which the first one ended in divorce. In 1923, she married George Tuttle Brokaw at the age of 20 but separated due to him being an alcoholic in 1929. The couple had a daughter named Ann Clare Brokaw who died at the young age of 19 due to an automobile accident.

She then married multi-company publisher Henry Robinson Luce on November 23, 1935. The couple was together until his untimely death due to a heart attack in 1967.

Clare Boothe Luce remained a widow then until her death on October 9, 1987, due to brain cancer. She died on her home at Washington D.C. at the age of 84.


The Child Born of Illegitimacy

Despite Luce’s phenomenal success in her adulthood, her birth was covered in controversy. Born as Ann Clare on March 10, 1903, in New York City, she was the child of William Franklin Boothe and Ann Clara Schneider. She was the younger of two children, having an older brother named David Franklin Boothe. Since her parents were not married, they eventually split up in 1912.

Clare Boothe Luce inherited his father’s love for literature which she exhibited in the form of writing in her adulthood. At school, she graduated as the top student of her class in 1919 at Tarrytown, New York.

Clare Boothe Luce made her debut as a writer by her 1931 publication of Stuffed Shirts which was made up of a collection of short stories. She also had her hand in the writing aspect of various magazines.

Her first work as a playwright was entitled Abide With Me in 1936 which was a flop. Nevertheless, she continued producing more work and was skyrocketed to stardom with her work on the satirical movie entitled The Women in 1936. The play drew attention for its all-female cast with a dialogue that involved the discussion of men in a condescending manner. It was later on adapted into the big screen in 1936.

Eisenhower was elected president and appointed Clare Boothe Luce as the Italian Ambassador who made her the first woman ever to hold a diplomatic position in US Congress. She served in the post from May 4, 1953, to December 27, 1956.

Initially, a lot of people, especially the Italians, were skeptical with her abilities but she proved them wrong. By the end of her work, she was loved by a great many and dubbed as La Signora or The Lady, by the people of Italy.